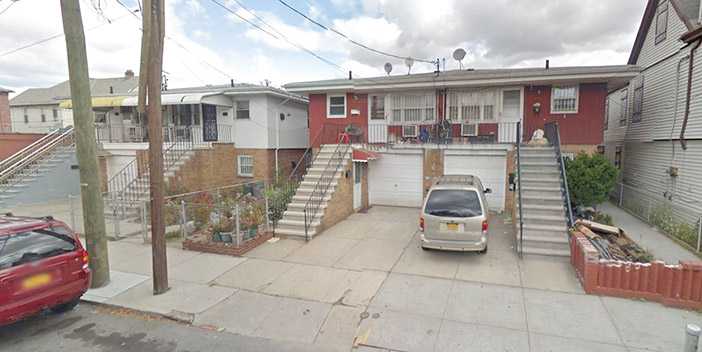 Maya Ranot was brutalized by her step-mom for years in this 96th Street home.

The evil step-mother from Ozone Park who was convicted of beating and starving her stepdaughter in July, has been sentenced to 15 years in prison. Maya Ranot,12, was abused by Sheetal Ranot and her biological father Rajesh for two years, repeatedly being  denied food and suffering brutal beatings. On one occasion, the child was left on the kitchen floor of the family’s apartment with a cut to her wrist from a broken metal broom handle that was so deep, the bone was exposed. That beating resulted in surgery and a lengthy hospitalization.

District Attorney Brown said, “Not only did she refuse to provide basic nourishment for the child, but the defendant also wantonly beat and abused the girl inflicting pain still evident by the scars that mark her body today.”

The defendant Sheetal Ranot, 35, of 96th   Street in Ozone Park, was convicted of first-degree assault and endangering the welfare of a child. Maya’s father, Rajesh Ranot, is also charged with second- and third-degree assault, first-degree unlawful imprisonment and endangering the welfare of a child. The couple’s case was severed at the start of the proceedings and he will be tried at a later date.

Testimony in the trial shows that Sheetal Ranot repeatedly hit her stepdaughter about her body and face, causing bruising and severe pain. She locked the youngster inside her bedroom and for extended periods of time refused to feed her between December 1, 2012, and May 6, 2014. In one instance, on December 21, 2012, Sheetal Ranot kicked the girl in the face while wearing footwear, causing bruising, swelling and substantial pain about her eye and face. On another date, April 16, 2014, she struck Maya in the face with a wooden rolling pin causing a laceration, swelling and pain to her left cheek that required the girl to be treated at a local Queens hospital. Doctors observed the child to be underweight and thin, weighing just 58 pounds.

In May 2014, Sheetal Ranot hit Maya with a broken metal broom handle. The blow caused a deep laceration to the left wrist and right knee. When medical personnel arrived at the family residence, they found Maya lying in a pool of blood in the kitchen with the tendons of her left wrist exposed. At that time, Maya was transported to Elmhurst Hospital where she underwent surgery for her wrist and received stitches to her knee. Doctors observed several bruises, marks and scars in various stages of healing throughout Maya’s body.