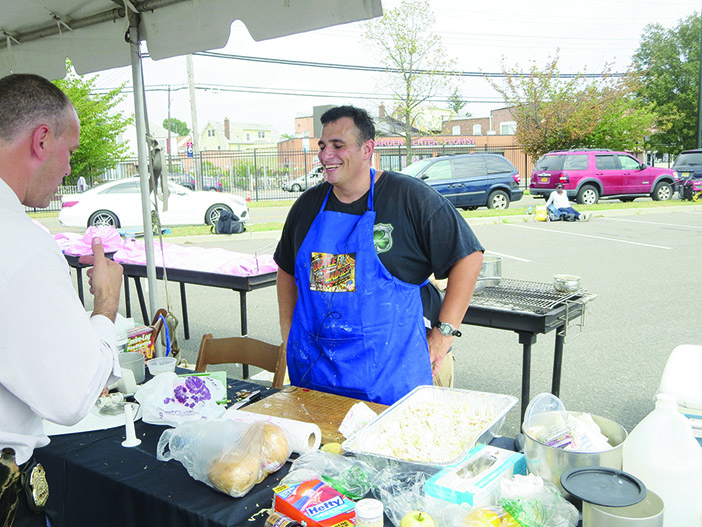 A member of New York City’s Finest finished in first place on Sunday, earning top civil-service chef honors at the second annual Battle of the Badges Cook-Off between the NYPD and FDNY at Resorts World Casino in South Ozone Park.

“I enjoy making simple dishes with international influences,” said Behringer, a 15-year NYPD veteran with the Highway Patrol’s Collision Investigation Squad, a specialized unit which looks into motor vehicle collisions that involve fatalities or serious injuries. “All my dishes are foods that my family and I enjoy eating.”

Asked about the rivalry between the two agencies, Behringer chalked it up to good fun.

“I believe the cook-off between the different city agencies is a great opportunity for us to come together and share a day of great food and friendly competition,” he said, noting that he loves to cook and has been at it since he was 18 years old. “It’s a way to release some stress and get together with people and share good food.”

Participants from the two first-responder agencies went grill-to-grill for bragging rights amid a day of fun, food, and festivities.

The cook-off also featured a South Queens community day that boasted everything from carnival games and face painting, to inflatable bounce-houses and a rock climbing wall.

Event host Ray Cooney, a retired FDNY firefighter and host of “Firehouse Kitchen” on PBS-NYCTV, which features firefighters and their favorite recipes, predicted “the winner will likely be a fireman,” adding that “firemen cook and cops sit in cars.”

“It’s a great day for the borough and the city of New York,” Katz said. She also thanked all first responders for their work following the bombing in Chelsea on Saturday night.

“It’s all right,” he said. “I’m happy to participate and be able to cook in the competition.”

Chris McGuinness, a detective with the 71st Precinct in Brooklyn, said he was thinking “outside the box” this year with his chicken and burger dishes, which cooked up the 3rd Place prize.

McGuinness, an 11-year veteran of the NYPD who admits that he “always wanted to be a cop,” served freshly prepped chicken, ginger and apple sausage made with apple and jicama style slaw. His second dish took dry-aged steaks ground with fresh spices, garlic, and sautéed portobello mushrooms topped with blue cheese crema on toasted brioche.

“I’ve made variations of these dishes before but never these exact dishes. I basically made the recipe up,” McGuinness said. “I’m always cooking for the guys I work with.

“We definitely don’t have the time to cook like the Fire Department, who also gets paid to sleep and play video games,” he added with a hearty laugh.