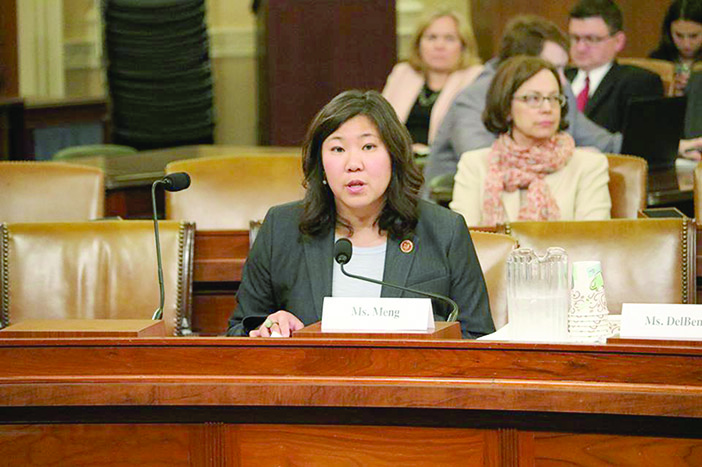 U.S. Rep. Grace Meng (D-Flushing) recently announced that she has introduced a measure that seeks to expand federal anti-stalking laws, making it a crime to threaten the victim’s friends and co-workers.

Federal laws on the books indicate that it is a crime to threaten another person, as well as their family or companion, with harm that could result in injury or death.

“Adding friends and co-workers of stalking victims to the list of those who are protected from violence is common sense,” Meng said. “Co-workers and friends deserve the same protections from stalkers that family members receive, and this legislation would make that happen. It would also ensure that violent stalkers are fully punished for the crimes they commit. I urge the House hold a vote on this critical bill.”

The Expanded Stalking Protections Act would cost no money if enacted into law, Meng noted; it would just boost the number of individuals who become covered under the federal stalking statute.

The DOJ report also noted that while the federal government, all 50 states, the District of Columbia, and U.S. Territories have enacted criminal laws to address stalking, the legal definition for stalking varies across jurisdictions. State laws vary regarding the element of victim fear and emotional distress, as well as the requisite intent of the stalker. Some state laws specify that the victim must have been frightened by the stalking, while others require only that the stalking behavior would have caused a reasonable person to experience fear. In addition states vary regarding what level of fear is required. Some state laws require prosecutors to establish fear of death or serious bodily harm, while others require only that prosecutors establish that the victim suffered emotional distress.

In New York, according to the National Center for Victims of Crime, a person is guilty of stalking when he or she intentionally, and for no legitimate purpose, engages in a course of conduct directed at a specific person, and knows or reasonably should know that such conduct:

Meng’s measure has been referred to the House Judiciary Subcommittee on Crime, Terrorism, Homeland Security and Investigations where it is pending further action.