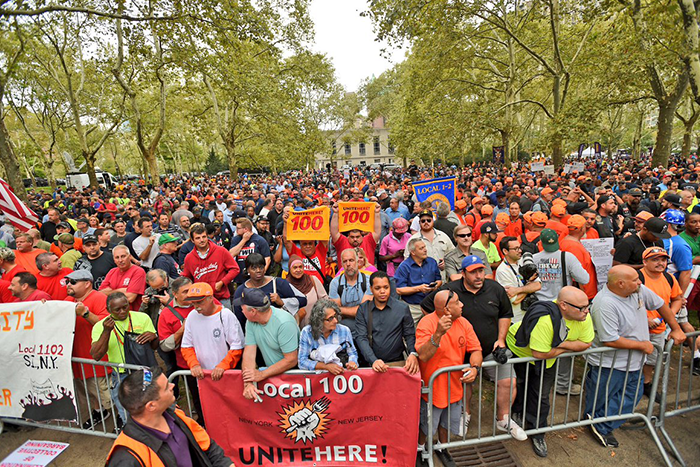 Photo Courtesy of the Governor’s Office

“The labor movement is the demand for respect and fairness. Proud to stand with @IBEW Local 3 #SpectrumStrike,” Gov. Cuomo captioned this picture on Twitter of Monday’s International Brotherhood of Electrical Workers Local 3 rally at Cadman Plaza in Brooklyn.

By Michael V. Cusenza
The governor and the mayor this week addressed a labor march and rally in Brooklyn in support of the 1,800 employees of Charter Communications/Spectrum that are on strike.
The workers, who are members of Local Union No. 3, International Brotherhood of Electrical Workers, were formerly employed by Time Warner Cable before the purchase by Charter, and have been working under an expired agreement.
“Both TWC and Charter have refused to bargain with Local 3 for over two years,” according to Local 3 leadership.
On Monday, Gov. Andrew Cuomo told the striking employees that he will be with them “every step of the way.”
“We are going to demand respect for the skills and experience of the workforce. And we are going to demand fairness. Fairness for the worker’s contribution to the company. Fairness to the fact that without you, the CEO doesn’t make $98 million this year. And fairness in wages because the working men and women deserve their piece of the American pie also,” Cuomo said in Cadman Plaza.
Mayor Bill de Blasio declared “New York City is a union town.”
“We do not accept a greedy corporation trying to undercut the most basic rights of working people. We do not accept it in New York City,” he continued. “You see these signs out here that say ‘elimination of the middle class’? That’s what Charter Spectrum is doing. Taking away the chance for good working people to make it to the middle class and stay there. We will not accept that in New York City, will we?”
According to Local 3, Charter/Spectrum:
• promised customer’s internet speeds knowing their equipment was not capable of delivering.
• has been disciplining their technicians over repeat service calls to customers over unobtainable Wi-Fi internet speeds.
• is forcing technicians to install refurbished equipment not capable of maintaining internet speeds.
• is not providing proper training and promotions to their technicians.
• is using subcontractors from other states in violation of the New York City Franchise Agreement.
• proposes to reduce medical benefits for their technicians.
• is being sued by State Attorney General Eric Schneiderman for lying about their internet speed.
“If they won’t give you peace, you don’t give them peace,” de Blasio added. “We are together in this, so the City of New York, your government stands with you. And Charter/Spectrum has an easy choice to make. Come forward in good faith, treat working people with decency and dignity or suffer the consequences if you don’t.”