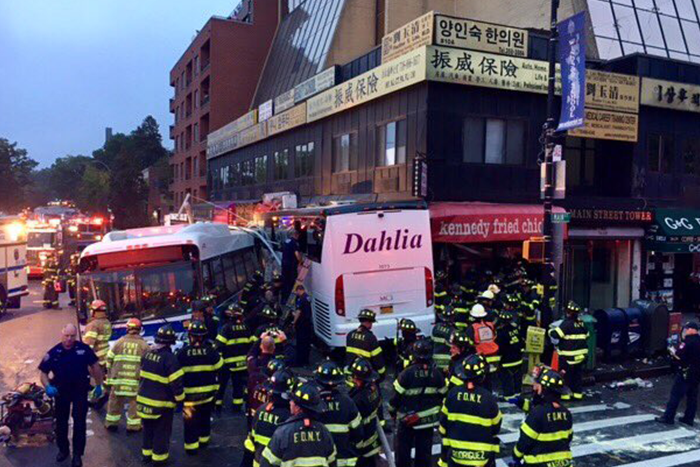 The Dahlia charter bus on Monday morning plowed into the rear of the Q20 at the intersection of Main Street and Northern Boulevard.

By Michael V. Cusenza
Three people were killed and another 17 injured early Monday morning after a tour bus barreled into a Metropolitan transportation Authority bus at a high rate of speed in downtown Flushing.
Raymond Mong, 49, was behind the wheel of the Dahlia Group Inc. charter when it plowed into the rear of the Q20 at approximately 60 miles per hour. Mong and two pedestrians died. At least three people suffered severe injuries, and as of Wednesday afternoon were still listed in critical condition at borough hospitals.
U.S. Rep. Grace Meng (D-Flushing) said she was “devastated” by the crash.
“I have been in touch with the National Transportation Safety Board, and I thank the NTSB for swiftly announcing an investigation into this terrible incident. NTSB’s accident report will help determine the cause of the crash and how to prevent tragedies like this from occurring in the future,” Meng added. “My thoughts and prayers are with all those impacted by the deadly accident, and I will be in close contact with the NTSB as it develops its report and safety recommendations.”
It has been revealed that Mong should never have been in the driver’s seat on Monday. According to a New York Daily News report, the Flushing resident should have been banned from driving buses in New York because of a 2015 drunken driving conviction in Connecticut.
City Councilman I. Daneek Miller (D-St. Albans) said he’s “praying for the health and swift recovery of those who were grievously injured. Our first responders should be commended for their efforts to preserve the lives of all who were affected. It will take time for the authorities to piece together the series of events that caused this calamity, and I trust they will do so with appreciation for our desire to quickly understand what happened. We can only hope that greater scrutiny will be paid to vehicles operated by companies with dubious safety records. Otherwise, these deaths will be in vain.”