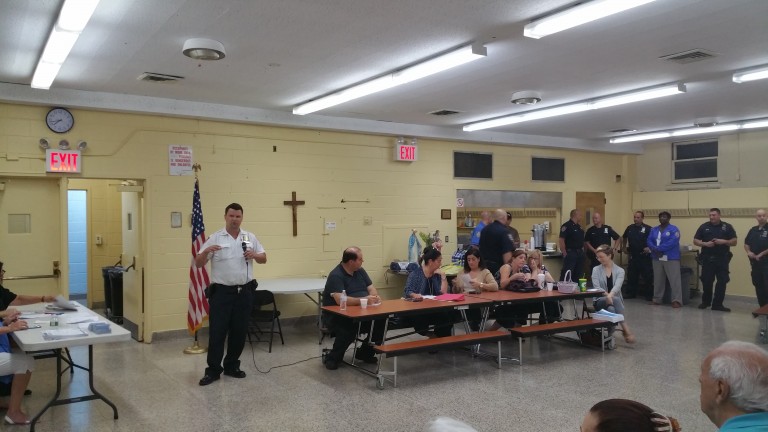 The summer crime story of the 106th Precinct was a relatively blissfully quiet tale, according to command brass who on Tuesday delivered statistics to area residents at the Howard Beach-Lindenwood Civic meeting at St. Helen Catholic Academy.

Overall, complaints for major index crimes – murder, rape, robbery, felony assault, burglary, grand larceny, and grand larceny auto – are down by more than 100, year to date, compared to the same period in 2016.

“That’s pretty much because of the eyes and ears of my cops,” Edmonds added.

The XO later extolled the benefits of Neighborhood-Based Policing, which was instituted in the 106 in July.

“It’s definitely been working out,” he said.

Captain Edmonds also noted that thanks in large part to the new Neighborhood-Based Policing approach, response times in the south Queens command has plummeted to approximately five minutes from nine minutes just a year ago. This statistic elicited loud cheers from all inside St. Helen’s cafeteria.

In other civic meeting developments, Assemblywoman Stacey Pheffer Amato (D-Howard Beach) noted that she’s gearing up for an upcoming special conference in Albany to discuss the funding of the Metropolitan Transportation Authority. Pheffer Amato pledged to raise the subject of reactivating the long-defunct 3.5 mile Rockaway Beach Rail Line, which, before it was shuttered in 1962, connected Rockaway and southern Queens with Rego Park, provided area residents with expedient access to other parts of the city, and 40-minute commutes to Midtown Manhattan from the Rockaway Peninsula.

The transformed track would be known as QueensRail.

“If it ever has the chance to get on the books, it’s kind of right now,” the assemblywoman said on Tuesday evening. “We can’t keep investing in the same system; we have to have an alternative.”

Pheffer Amato also mentioned that groups supporting the concept of the QueensWay project – converting the abandoned RBRL into a $120 million public park, similar to the Highline in Chelsea, boasting trails and amenities – have not been amenable to compromise.

“We met with them, and they really weren’t budging,” she said.

Still, the assemblywoman indicated that she has faith that the underfunded underdogs will emerge victorious.

“I’m not concerned with their fancy brochures and buttons – we are the voice of the people,” Pheffer Amato added. “I do believe in [the QueensRail]. I do believe transportation will prevail.”