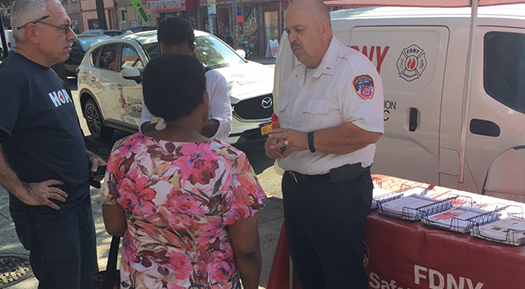 On Monday, the FDNY’s Fire Safety Education Unit set up on 97th Avenue near the scene of Sunday’s fatal fire and shared safety information with area residents.

By Michael V. Cusenza
An Ozone Park landlord died early Sunday morning after a blaze broke out in the basement of his three-story home on 97th Avenue, fire officials said.
The fire erupted around 2:30 a.m., startling Mohinvei Singh, 68, who was sleeping on the first floor. According to a New York Daily News report, Singh went to inspect the cellar, but never returned.
After firefighters brought the blaze under control around 3:40 a.m. they discovered Singh’s body in the basement.
According to City fire marshals, the cause of the all-hands inferno was “accidental ignition of natural gas.”
Singh is survived by his wife, three children, and four grandchildren.