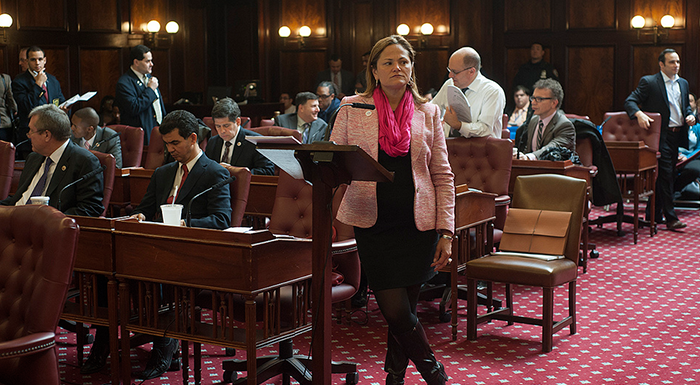 Council Speaker Melissa Mark-Viverito and her colleagues recently voted 47-0 in favor of instituting a public alert system for hit-and-run incidents.

The City Council recently approved several pieces of proposed legislation, including a bill that calls for the creation of a public alert system for hit-and-run incidents.
Introduction 1463-A, which passed the City’s legislative body last week by a 47-0 tally, would require the City to establish a system, similar to America’s Missing: Broadcast Emergency Response (AMBER) Alerts, to notify the public and media of hit-and-run incidents resulting in serious injury or fatality, in order to assist in the identification of drivers responsible for these events.
“From January to September, 42 hit-and-run crashes were reported and only 18 arrests were made. We cannot tolerate these crimes knowing that families are left destroyed and mourning the loss of a loved one,” said Councilman Ydanis Rodriguez (D-Manhattan), chairman of the Council Transportation Committee and the sponsor of the measure. “This irresponsible driving behavior has triggered me to advocate for an alert system for the purpose of increasing the number of hit-and-run arrests in NYC. Using technology already available to us to make New Yorkers aware of hit-and-run crashes that resulted in severe physical harm or death will make the more than eight million New Yorkers a resource for the NYPD in finding the suspect.”
The bill was inspired by Jean Paul Guerrero, a.k.a. DJ Jinx Paul, a popular Latin radio personality who was killed in Brooklyn in a hit-and-run on Dec. 19, 2016. He was 39 years old.
Kevin Ozoria, 28, has been charged as the alleged driver in the fatal accident.
Additionally on Thursday, the council voted in favor of a bill that would officially deem “revenge porn” illegal. Sponsored by Councilman Rory Lancman (D-Hillcrest), Intro. 1267-A would prohibit the nonconsensual distribution of sexually explicit videos or images of another person, with the intent to cause harm to the person depicted in such videos or images. The bill also prohibits any legitimate threat to do so. The measure creates both a criminal penalty and a civil cause of action, and contains limited exceptions, Lancman noted.
“With passage of this landmark legislation, New York City finally calls revenge porn exactly what it is: a crime,” said Lancman, chairman of the Committee on Courts and Legal Services. “For too long, our laws failed to keep up with our technology, leaving victims of revenge porn unable to seek justice and hold perpetrators accountable. That changes today. Criminalizing revenge porn will ensure New Yorkers are protected and those who take part in this despicable conduct will face serious consequences. I commend the victim advocates, law enforcement personnel and revenge porn survivors who raised their voices to make this day a reality.”
The council also approved legislation that would require City employees and contractors to protect all identifying information—including contact information, sexual orientation, religion, and immigration status—by limiting its collection, disclosure, and retention, except where required by law. Requests for the collection or disclosure of identifying information would be processed by a newly established privacy officer within each agency who would analyze whether the collection or disclosure would further the purpose or mission of the agency.