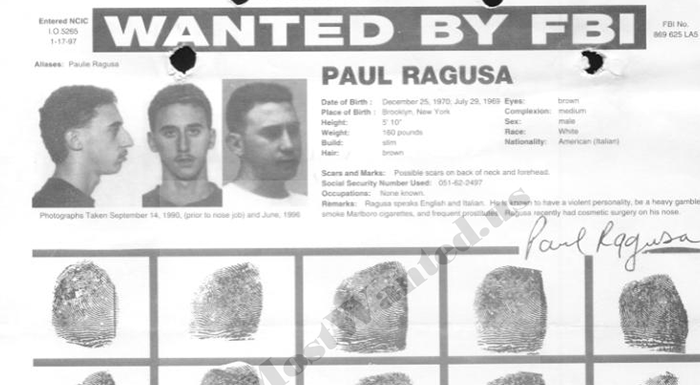 Photo Courtesy of FBI Most Wanted

Paul Ragusa, a long-time associate of the Bonanno and Gambino families, at one time was No. 1 on the FBI’s Most Wanted list.

By Michael V. Cusenza
Earlier this month, three indictments were unsealed in Brooklyn federal court charging four men with narcotics trafficking, loansharking, and firearms offenses, according to the U.S. Attorney’s Office for the Eastern District of New York.
And the name of at least one of those four defendants is going to sound quite familiar to longtime residents of Ridgewood, Maspeth, Middle Village, Glendale, and Rego Park.
Damiano Zummo, an acting captain in the Bonanno crime family; Salvatore Russo, an associate of the Bonanno crime family; Paul Semplice, a member of the Gambino crime family; and Paulie Ragusa, an associate of the Bonanno and Gambino crime families, were arrested and arraigned on Wednesday, Nov. 8.
Ragusa, 46, was once a leader of the infamous Giannini Crew (named for the defunct Ridgewood café in which they congregated), a tight-knit group of up-and-coming La Cosa Nostra talent that the feds dismantled in the late ’90s after they terrorized Queens via mob staples like loan-sharking, extortion, and arson; as well as a series of armed robberies, assaults, and murder.
Ragusa and 13 other members were indicted in June 1996. But he went on the lam before authorities could cuff him. Months later, Ragusa, then 26, shot to the Number 1 spot on the Federal Bureau of Investigation’s Most Wanted list, where he remained for roughly a year until agents finally caught up to him.
Ragusa pleaded guilty to racketeering in 1998 and was sent to prison for 19 years. He had nearly completed his bid – he was living in a halfway house in Brooklyn when he was taken into custody a couple of weeks ago. According to noted American mafia expert and Gang Land News founder Jerry Capeci, an old Giannini Crew cohort recorded Ragusa, among other offenses, “buying a small arsenal of weapons…”
Ragusa is charged with being a felon in possession of nine firearms, including three automatic assault rifles and one silencer. As alleged in the indictment, Ragusa transported the firearms in exchange for $2,000 in cash. He now faces a mandatory minimum sentence of 15 years and a maximum sentence of life imprisonment under the Armed Career Criminal Act.
“Criminal enterprises, both national and international, contribute to the breakdown of a lawful society,” said FBI New York Assistant Director-in-Charge Bill Sweeney. “And yet, the allure of this gangland culture is often embraced and glamorized in movies and on television, where the threats posed to our economic and national security are seldom displayed.”