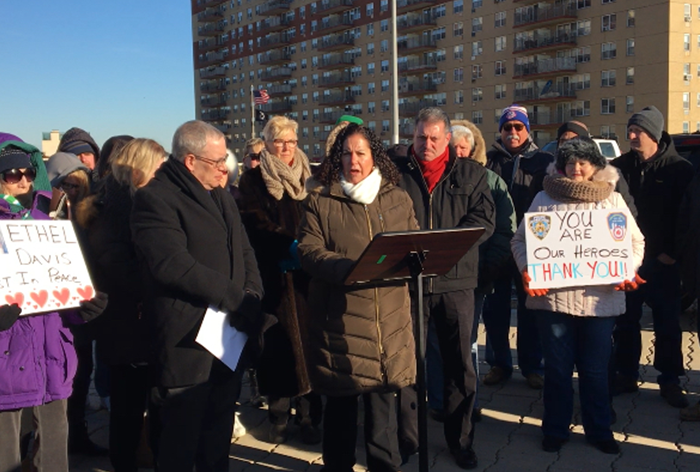 “As a shareholder I am terrified,” said Assemblywoman Pheffer Amato. “As an elected official, I am disgusted.”

Shareholders and elected officials are demanding answers from the City after a fast-moving fire in a Rockaway Beach cooperative building on Friday morning claimed the life of an elderly woman and injured 16 others, including nine police officers and three firefighters.
Ethel Davis, 91, who lived on the 12th floor of the Dayton Beach Park building on Shore Front Parkway near Beach 87th Street, succumbed to her injuries on Saturday morning. According to City Fire officials, the blaze broke out around 11:20 a.m. in an apartment on the 11th floor. Fire marshals have determined that a halogen lamp set up near combustible items sparked the inferno, while a paucity of smoke alarms stymied early evacuation efforts.
Assemblywoman Stacey Pheffer Amato (D-Howard Beach), State Sen. Joe Addabbo, Jr. (D-Howard Beach), and City Comptroller Scott Stringer joined shareholders on Sunday in calling out the City Department of Housing Preservation and Development for lack of oversight in providing annual apartment inspections in Dayton Beach Park, a Mitchell-Lama housing development co-op.
Signed into State law in 1955, the Mitchell-Lama program provides affordable rental and co-op housing to moderate- and middle-income families through waiting lists kept by each development.
“As a shareholder I am terrified. As an elected official, I am disgusted. Something is not right,” an irate Pheffer Amato said. “Since being elected in 2016, I have expressed concerns regarding the absence of annual apartment inspections within DBP, as well as management and board of director issues. Apartment inspections are not only necessary, but required in order to ensure the safety and quality of life for all shareholders. This fire was an incident waiting to happen.”
Last August, Pheffer Amato sent a letter, at the request of hundreds of constituents and shareholders, to both HPD and First Service Residential (which managed the buildings until Dec. 31, 2017), expressing concerns regarding the inspections—or lack thereof.
“According to the contract between First Service Residential and the NYC HPD, management is required to conduct and prepare the annual apartment inspections and reports. Additionally, this is a requirement by HPD as stated in the Mitchell-Lama rules,” Pheffer Amato wrote.
HPD responded in a letter dated Aug. 30, 2017 by Assistant Commissioner Julie Walpert, who stated: “Please be advised that inspections will be conducted by management the third week of September.” Pheffer Amato noted on Sunday that, according to residents, zero inspections have been conducted.
Stringer called the situation “deeply, deeply alarming.”
“The agency must step up and ensure that all regulations are enforced, both in the Rockaways and across the city,” he added. “This is about the safety of New Yorkers, and it’s about right and wrong.”