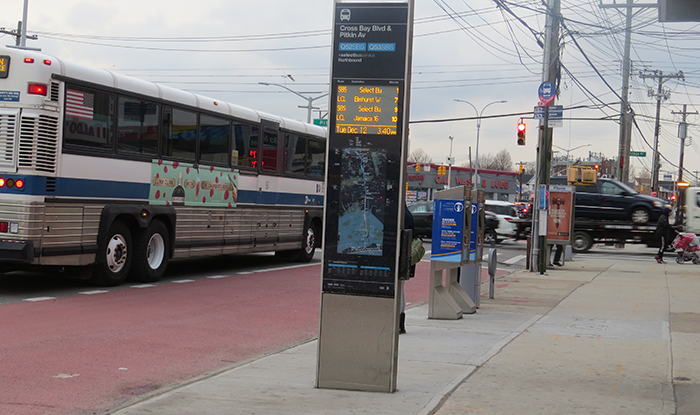 Some positive and negative changes are on the way to Select Bus Service lanes along Cross Bay Boulevard.

The Saturday “rush hour” limitations on parking in curbside Select Bus Service lanes along Cross Bay Boulevard south of Liberty Avenue have been lifted, according to area elected officials.
State Sen. Joe Addabbo, Jr. (D-Howard Beach) and Assemblywoman Stacey Pheffer Amato (D-Howard Beach), who have been in discussions with the City Department of Transportation for months to amend the active hours, made the announcement on Thursday in front of C-Town Supermarket on Cross Bay Boulevard and Sutter Avenue.
“When I first saw that the curbside SBS lanes would be in effect on Saturdays, I knew that had to be changed. There is no rush hour on Saturday, so I felt that day should be given back to the drivers, allowing them to park and access the local businesses,” Addabbo said. “I am glad to see that DOT heard the frustrations and followed through on their promise to continue to look at the SBS route after it was implemented to see how it affected the residents and business owners.”
When the new Q52/Q53 Woodhaven-Cross Bay Corridor bus service began in November, curbside SBS lanes were active during the morning and afternoon rush hours, from 7 a.m. to 10 a.m., and from 4 p.m. to 7 p.m., Monday through Saturday, frustrating area residents and business owners who lamented the loss of valuable parking spots.
Pheffer Amato praised DOT for the “common sense” move.
“Our local businesses are the heart and soul of South Queens, it is great to see the Department of Transportation listen and work with our community to ensure residents can have the ability to access their local businesses and facilities,” she said.
Addabbo called the Saturday change a big win for area entrepreneurs. Since November, Addabbo, Pheffer, City Councilman Eric Ulrich (R-Ozone Park), and Assemblyman Mike Miller (D-Woodhaven) have been inundated with business-constituent concerns regarding the negative impact of the City’s latest SBS venture.
“While it is important to expand bus service to neighborhoods like the Rockaways, where transportation options are limited – it is crucial the expansion does not come at the expense of residents and local business owners,” Ulrich said.
“Many businesses were negatively affected by the SBS lanes,” Addabbo added. “This change is a step in the right direction to make the roads accessible for everyone and I appreciate DOT’s willingness to work with the local electeds and the community.”
In other SBS news, on Monday DOT announced that, beginning Feb. 20, it will be issuing bus lane camera violations along the Cross Bay route.
If you drive, park, or stand in a bus lane during hours of operation you face fines ranging from $115 to $150, DOT noted.
Each corridor has signage indicating the hours that the bus lanes are operable, and that the lanes are camera enforced. The department indicated that it issues warnings to motorists for at least 60 days prior, per state law, when the cameras are first operated to ensure that drivers are informed about the program. Since violations are issued against the vehicle, not the driver, points are not deducted from motorists’ licenses.