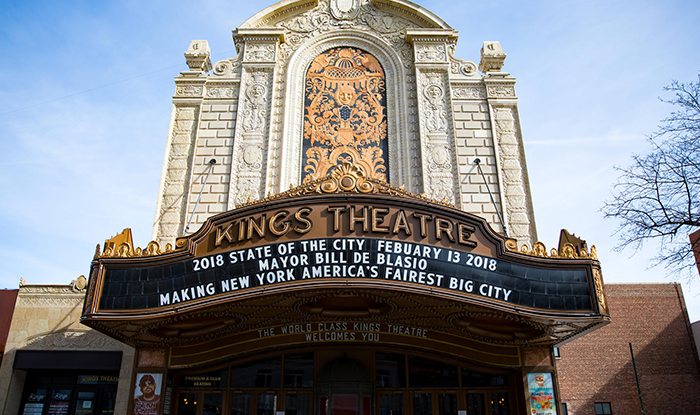 By Michael V. Cusenza
The setting was different, but the theme quite familiar.
It’s been the same since he was reelected to a second term back in November: The Big Apple as fairest big city in America.
And according to Mayor Bill de Blasio, he and his administration have exactly three years, 10 months, and 14 days to achieve that goal.
“We will take on that mission and we will do it with speed and we’ll do it with urgency,” Hizzoner said Tuesday evening on stage at the historic Kings Theatre in Flatbush, Brooklyn, during his fifth State of the City address. “We do this to ensure a better life for all 8.5 million of us. We do this to preserve the social fabric of the most diverse place on earth. We do this to insure that we’re always a place for everyone, that magical openness that has made New York City great is always protected. But we also do this to guard against the threats to our democracy that are growing across this nation. It’s our mission to define what a fair and just society looks like, to show it through our deeds and in our everyday lives. To take that quintessentially American egalitarian spirit and make it come alive again. We have to be the keepers of that flame. We have to ask ourselves, if not here, where? We, in fact, have to be the antidote to the sickness that is gripping our nation.”
De Blasio went on to detail a dozen proposals that will help thrust New York into the role of fairest big city, and, in his words, “protect and reinforce our battered democracy.” Those measures include investing in the City Housing Authority, fighting the opioid epidemic, and a robust employment plan.
“There’s another good way to make sure New Yorkers can afford the city they love, give them better paying jobs,” the mayor posited. “A truly just society constantly tries to share the wealth, to do what a slogan from the progressive era of a hundred years ago called for, a very simple slogan, it says, ‘Pass prosperity around.’ Well, as this city become more prosperous, we have more jobs than at any other time in our history right that the moment in the city, but we need to get better-paying jobs in the hands of New Yorkers.”
De Blasio on Tuesday also took plenty of veiled and not-so-veiled shots at a certain Queens native now living and working in the White House.
“In Washington we will fight for real infrastructure planning with ample federal dollars so we can fix what’s broken and build the economy of the future. But, again, we’re nobody’s fools, and I assure you we will not fall for privatization schemes that enrich the few and achieve little,” he said. “One thing we should look forward to doing…we will fight to rescind the Trump giveaways to the wealthy and the big corporations.”
De Blasio wrapped up his remarks by unveiling a 10-point plan called Democracy NYC aimed at revolutionizing voting, campaigns, and elections in the Big Apple.
“We are poised at the beginning of a new age, something we’ve never seen before. We have a new and bolder chapter to write,” the mayor said, “and its author will be you.”