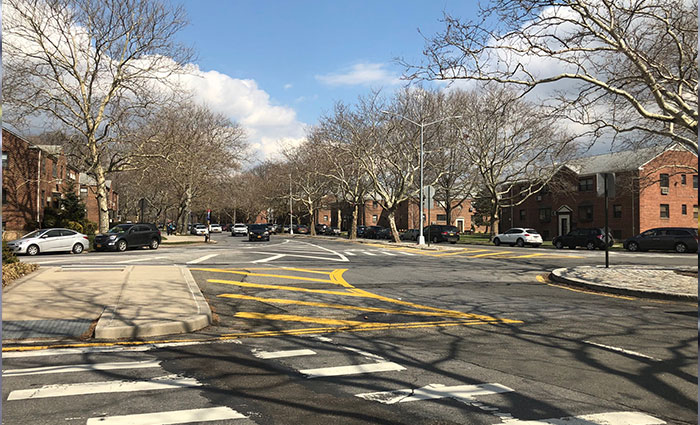 The road markings at the traffic triangle at 153rd Avenue and 88th Street have long caused confusion among motorists and pedestrians.

Lindenwood community leaders and elected officials have enthusiastically approved the City Department of Transportation’s proposal to turn a dangerous traffic triangle into a safer mini roundabout.
The Howard Beach-Lindenwood Civic, Community Board 10, City Councilman Eric Ulrich (R-Ozone Park), Assemblywoman Stacey Pheffer Amato (D-Howard Beach) and State Sen. Joe Addabbo, Jr. (D-Howard Beach) all gave the green light to the plan late last week.
“Everyone’s on board,” civic President Joann Ariola told The Forum on Tuesday.
Poor visibility and the confusing, labyrinthine configuration of the traffic triangle at the intersection of 153rd Avenue and 88th Street have sparked accidents and myriad near-misses for many years, area residents have noted.
“It’s a problem,” Ariola sighed. “I’ve lived here my whole life and even I’ve taken a wrong turn there.”
According to the DOT proposal, the mini roundabout features: new crossings with painted refuge islands and curb extensions; additional pedestrian space; flush medians; and striped parking lanes.
And the benefits of the plan include: new shorter crossings clarify pedestrian paths and expand the pedestrian network; calms traffic on all approaches to intersection; reduces speeding by narrowing travel lanes with painted parking lanes and flush medians; large, painted pedestrian area provides a new public space to the community.
“The ins and outs of the traffic pattern will be evident,” Ariola said.
A brightly decorated centerpiece will also be noticeable when the project is completed in time for the start of the 2018-2019 school year. The City has promised to install flower boxes and other amenities at the intersection. The civic has pledged to maintain it.
“So it’s going to be a beautification site as well as a safer place for motorists and pedestrians,” Ariola added.
The redesign of the Lindenwood traffic triangle has been a long time coming. For years, community leaders and elected officials have implored DOT to do something to enhance pedestrian and driver safety at the intersection. Ariola noted that the reconfiguration is the product of a public-private partnership.
“This really is the perfect example of community and government working together,” she said.