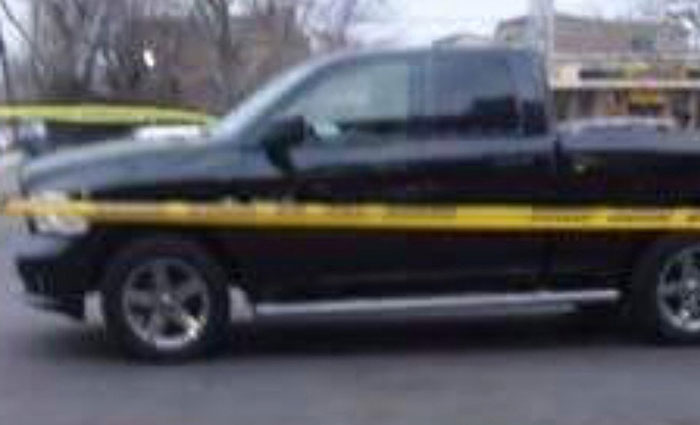 Forum Photo Courtesy of a witness at the scene

Police tape roped off the truck that struck Sandy Rosenthal during a police investigation at the scene.

By Patricia Adams
Sandy Rosenthal never knew what hit her.
Witnesses at the Monday afternoon scene said the 75-year-old Howard Beach resident was making her way across the Howard Plaza Shopping Center parking lot to the car where her husband was loading up groceries when a late-model, black Dodge Ram 1500 struck her.
According to eyewitnesses and surveillance video, the driver was traveling in reverse and against the stenciled arrows painted on the lot asphalt. He remained at the scene.
A number of good Samaritans immediately ran to Rosenthal’s side where she lay motionless and called 911. She was rushed to the Traumatic Brain Injury Unit at Jamaica Hospital Medical Center where Forum sources confirmed late Tuesday night that her condition was extremely critical and that she was in the Intensive Care Unit. Sources say she suffered two broken arms and a brain bleed. On Wednesday, however, The Forum learned from a hospital spokesperson that Rosenthal’s condition had been upgraded to stable.
Police have not released the name of the driver as they have determined that there was no criminality associated with the incident.
Almost immediately after the accident, social media rants were posted on various sites, the majority of which were laced with inaccurate and inflammatory comments. More than one such post indicated that Rosenthal had succumbed to her injuries, while others condemned the driver and pointed fingers at the management of the shopping center.
Howard Beach-Lindenwood Civic President Joann Ariola was quick to clarify any lack of responsibility by Howard Plaza management.
“I have personally worked with these people on repeated occasions over the years and have never encountered anything less than 100 percent cooperation from them in ensuring the public’s well-being and safety on their property,” she told The Forum.
Ariola bolstered her remark by noting the installation of signage and stenciling of the parking lot to direct traffic, which was all redone late last year.
“This was a most unfortunate and tragic accident,” she added, “however, everything that could possibly be done to inform drivers of the regulations in that lot has been done. This was a case of utter disregard for regulations. Our thoughts and prayers are with the Rosenthal family and we are hopeful that Ms. Rosenthal makes a full and speedy recovery.”