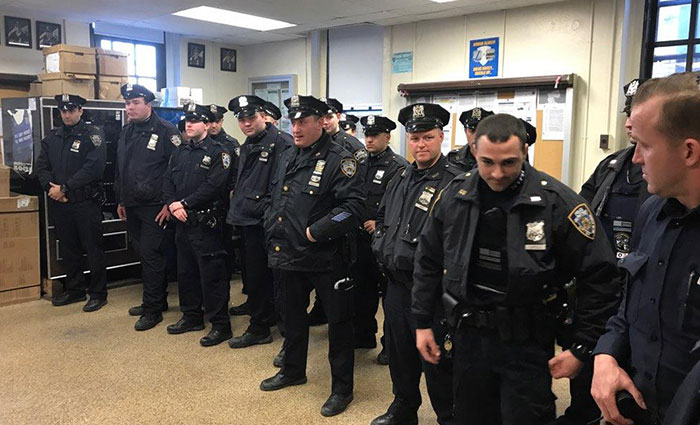 Neighborhood Policing launched in the 106th Precinct in July 2017.

By Michael V. Cusenza
Neighborhood Coordination Officers assigned to Sector A (Howard Beach and Lindenwood) of the 106th Precinct reached out to The Forum this week to help spread the word about the next sector meeting, which is set for this Monday, April 16, 5:30 p.m., at St. Helen Church, 157-10 83rd St., in Howard Beach.
Pete Paese and Mike Petrizzo, who have been the Sector Adam NCOs since Neighborhood Policing launched in the 106 last July, will lead the hyper-local confab.
In all, the south Queens command has one Coordination Sergeant and 10 Neighborhood Coordination Officers who serve four sectors and Resorts World New York Casino.
According to the City Police Department, NCOs are conceived as liaisons between the police and the community, but also as key crime-fighters and problem solvers in the sector. While they answer some radio calls to keep them conversant with the daily workload, the NCOs spend more time actively familiarizing themselves with the community to better respond to neighborhood-specific crime and other conditions. The NCOs immerse themselves in the community by attending meetings with community leaders and clergy, visiting schools, following up on previous incidents, and using creative techniques and adaptive skills to fight crime unique to their particular sectors.
“The NYPD’s Neighborhood Policing Program marks the first time any police department, anywhere, is totally reorganizing to deliver the same cops, in the same neighborhoods, every day,” Police Commissioner Jim O’Neill said earlier this year. “So, now we will know members of the community, know the problems, and work together to solve them.”