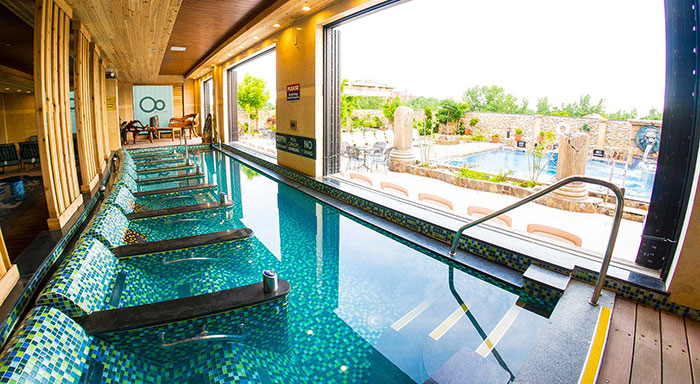 Spa Castle is open all year and offers a variety of services including massages, facials, saunas, swimming pools, restaurants, bars, and other amenities.

By Michael V. Cusenza
The operator of an infamous College Point bathhouse has pleaded guilty to felony tax fraud charges and will pay a total of $2.5 million in criminal restitution and civil damages, State Attorney General Barbara Underwood announced on Thursday.
Spa Castle Inc. pleaded guilty to second-degree criminal tax fraud; corporate officer Daniel Chon pleaded guilty to third-degree attempted criminal tax fraud.
According to statements made by the prosecutor and court documents, Spa Castle is open all year and offers a variety of services including massages, facials, saunas, swimming pools, restaurants, bars, and other amenities. Founded in May 2007, Spa Castle turns a profit by charging admission to the 11th Avenue facility and through additional fees for the other services offered.
“It is the perfect combination of traditional Asian and luxurious European spas,” according to the company’s website. “In consultation with overseas experts, we have created numerous [innovative] spa and sauna systems never seen before in the United States.”
Between 2010 and 2013, Spa Castle Inc. also generated more than $22 million per year in revenues, according to prosecutors.
After a whistleblower filed an action in the fall of 2014, the Attorney General’s Taxpayer Protection Bureau commenced a civil investigation into Spa Castle. A preliminary investigation of the information provided by the whistleblower revealed substantial indications of “knowingly fraudulent conduct” on the part of Spa Castle and its principals.
The Attorney General’s Criminal Enforcement and Financial Crimes Bureau thereafter commenced a parallel criminal investigation related to the bathhouse. In August 2015, investigators from the State AG’s Office and the State Department of Taxation and Finance executed a search warrant at Spa Castle which netted records that showed that Chon and Spa Castle avoided paying required sales, corporate, and Metropolitan Transportation Authority surcharge taxes by underreporting the money earned at the facility by millions of dollars. In March 2017, the Attorney General’s Office filed the indictment.
“This conviction proves that the local community is watching and they won’t stay silent when business owners violate their trust,” said Acting State Tax Commissioner Nonie Manion. “Robbing New Yorkers of funding for vital public programs and services carries serious consequences and we’ll continue to work with the attorney general and all our law enforcement partners to bring tax cheats to justice.”
Underwood heaped praise on the whistleblower, “without whose courageous step forward the misconduct might have remained concealed from the authorities.”
According to the AG, the whistleblower will receive $575,000 for bringing this conduct to light, as the New York False Claims Act entitles whistleblowers who report fraud against the government to a share of the recovery.
“We have zero tolerance for tax cheats who leave New Yorkers to foot the bill,” Underwood added. “The defendants orchestrated a multi-million dollar scheme to defraud taxpayers. We’re grateful to the whistleblower who helped bring this egregious conduct to light—and it should serve as a wake-up call to all tax fraudsters who think their misconduct will go by unnoticed.”