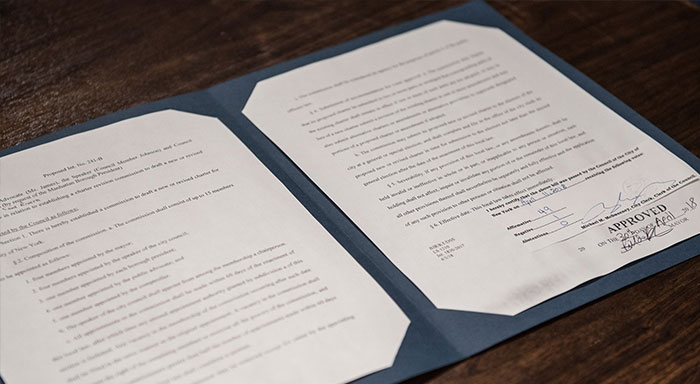 By Michael V. Cusenza
The City Charter Revision Commission on Tuesday voted to approve three ballot questions—covering campaign finance, community boards, and civic engagement—for the electorate to consider in November.
Features of the proposals include:
• Campaign Finance: Reduce contribution limits for all candidates for city elected offices, and increase public matching funds for candidates who participate in the public financing program. Contribution limits for participating candidates would be cut by more than 60 percent, while the matching rate on the “small dollar” portion of contributions to such candidates would increase from 6:1 to 8:1.
• Civic Engagement: Establish a Civic Engagement Commission whose mission includes expanding language access at polling sites, developing a citywide participatory budgeting program and supporting and partnering with community organizations in their civic-engagement efforts.
• Community Boards:The commission proposes term limits for community board members, who currently serve for two-year terms without limit, to create opportunities for new voices and leaders on all community boards. Members appointed or reappointed on or after April 1, 2019, would be limited to serving four consecutive two-year terms. However, members appointed or reappointed for a term commencing on April 1, 2020, could be reappointed for up to five consecutive two-year terms, in order to prevent a heavy turnover of community board membership in 2027 and 2028. Boards would also receive additional resources, particularly in urban planning.
“The proposals approved by the commission today will provide the voters with an opportunity to weigh in on changes that would impact several important aspects of civic life,” Charter Revision Commission Chairman Cesar Perales said.