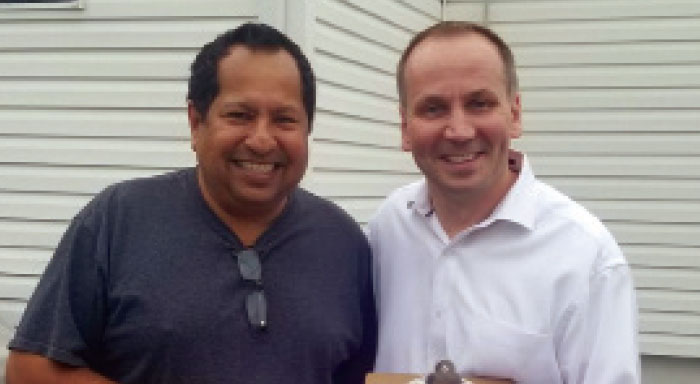 Unfortunately, here in Queens we’re a little too used to less-than-ethical local politics infused with scandal, and littered with corruption: Shirley Huntley, Brian McLaughlin, Hiram Monserrate, Anthony Seminerio, Ada Smith, Malcolm Smith—the list goes on, but we’re sure you get the point.
And in case you haven’t guessed, for the most part, the root of their crimes was the almighty dollar. Whether soliciting bribes for political favor or stealing State grants, perpetrating fraud or misappropriating campaign funds, this group of vultures circled around the cash and got snagged for their dirty deeds.
While we could never adjust the moral compass to condone these actions, they can be somewhat understood through the motivation of greed.
But there are some other actions emanating from the current political arena that could never be understood, nor should the good people of Queens tolerate them.
On Sept. 13, the Republican Primary for the State Senate District 15 seat will be held. The victor in that primary will go on to challenge incumbent State Sen. Joe Addabbo, Jr. (D-Howard Beach) in November.
Running in that contest is Tom Sullivan, a decorated war hero with multiple tours to Iraq, Afghanistan, and Kuwait. Sullivan, a small businessman, is a life-long Queens resident who has raised his family here and has admirable goals to serve the would-be constituency.
His opponent, Slawomir Platta is an alleged attorney who has lived in Queens for less than a year. Now even if we chose not to hold either of those things against him, there are a whole lot of other reasons that Platta needs to be stamped out before he goes much further.

Let’s start with that old adage “Tell me who your friends are and I will tell you who you are.” If you buy that then we can make our case very simply.
Platta’s buddy, and campaign consultant, is none other than former City Councilman Dennis Gallagher. You remember him: In the middle of his second term he was forced out of office because in a drunken rage he sexually assaulted a woman he had coaxed into his district office after which he burned her body with a cigarette.
But okay, let’s say it’s not fair to judge Platta on the basis of who his good buddy is.
In May 2017, Platta was arrested and charged with aggravated harassment after a female doctor threatened to expose his marital infidelity.
“If you tell anyone about my cheating, I will kill you and your family and ruin your life; I will send a patient to your practice to make false reports against you and ruin your career.”
That’s a direct quote from Platta straight from an official court document: The People of the State of New York, Plaintiff, v. Platta, Slawomir, Defendant.
In order to get on the ballot for the upcoming primary, Platta circulated a petition for a third party line called the No Homeless Shelter Party at a homeless shelter rally. The problem is that Platta told unsuspecting rally attendees that they were signing a petition to speak out about stopping Mayor de Blasio from creating any more homeless shelters.
When one such signer, Scott Jordan, realized he had been duped, he decided to become an objector to the petition at the NYC Board of Elections because the signatures were obtained through fraud and misrepresentation. Platta’s answer to that was to put out a media hit piece against an innocent constituent of the district and muddy his good name by circulating it through the district and on social media.
By the way, did we mention that Platta was collecting signatures personally, yet when the volume was submitted to the BOE, none of the sheets he carried were witnessed by him—a fatal flaw in the petition process.
While this editorial is in no way meant as an endorsement for Mr. Sullivan, we have no problem with his challenging Sen. Addabbo in the November bid and look forward to what both candidates have to say between now and then.
What we do have a problem with is yet another scoundrel trying to infiltrate our beloved borough and spread a brand of politics fit for hell.
When you vote next week, just make sure it’s Notta for Platta.