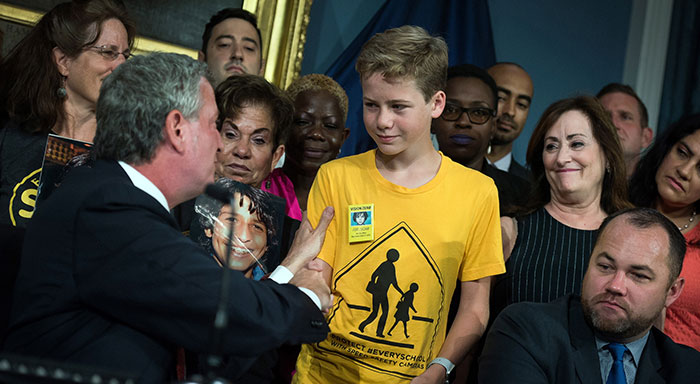 By Michael V. Cusenza
The hands of New York Democrats have certainly been sore this week from patting each other on the back following their recent victory in renewing and expanding the school zone speed camera program.
Mayor Bill de Blasio made it official this week when he signed Intro. 1089, which preserves and expands the use of speed cameras near schools where speeding is a consistent issue. The law will immediately be enforced at 140 schools where speed cameras previously existed. The City will be expanding the use of speed cameras to an additional 150 schools, bringing the total number of protected schools to 290.
“We refuse to let politics endanger our children, so the City is stepping up to provide these life-saving tools just in time for when 1.1 million children return to school,” de Blasio said.
All summer long, elected officials and street safety advocates have been pleading with State Senate leadership to reconvene a special session and vote to reauthorize the 2013 pilot program that placed 140 cameras around city schools across the five boroughs. Senate Republicans wouldn’t budge. The recording devices were shut off on July 25.
Governor Andrew Cuomo last week signed an executive order declaring a state of emergency in New York City and reinstating the speed camera program. The order temporarily suspended the sunset provisions in the program legislation, providing the City with the authority it needed to implement it ahead of the school year.
The executive order also directed the State Department of Motor Vehicles to help the City implement the program in time for the 2018 school year. The DMV granted the City Police Department access license records, a crucial component of the speed camera system.
And last Wednesday, the City Council voted, 41-3, to create a local speed camera program that would allow the City to impose liability on vehicle owners for failure to comply with maximum speed limits in school speed zones. The program would not have a cap on the number of cameras that could be operated and would allow the City flexibility in hours of operation to address safety concerns near schools. Vehicle owners would be liable for an operator of that vehicle exceeding the speed limit by more than 10 miles per hour in a school speed zone. Such vehicle owners would be liable for a $50 penalty.
According to the administration, speed cameras installed in city school zones have reduced traffic injuries to pedestrians, motorists, and cyclists by 17 percent, while reducing speeding by 63 percent on average; 81 percent of cars that received one speed camera violation do not receive a second, officials noted.
“We know that speed cameras save lives, and yet the Senate Republicans let this critical program expire and put our children in jeopardy. We will not stand idly by as the Senate Republicans play politics with the lives of our children. With the school year upon us, I took emergency measures to reinstate the speed camera program, and I thank Mayor de Blasio and [Council] Speaker [Corey] Johnson for working together with the State to keep our children safe,” Cuomo said on Tuesday. “This is an extraordinary action for an extraordinary situation, and it is not a substitute for the State Senate acting responsibly and passing the life-saving speed camera legislation.”