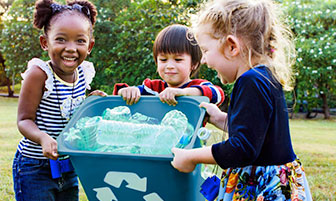 One of the main goals of the BRING IT campaign is the displacing more than 54 million single-use plastic bottles in the city.

By Forum Staff
The administration kicked off Climate Week on Monday by announcing BRING IT, a multi-channel campaign focused on helping students, and by extension their family and friends, reduce waste through advocacy and action.
BRING IT launches with a year-long partnership with reusable bottle company S’well, according to the City. Through this initiative, more than 320,000 high school students across all five boroughs will receive S’well or S’ip by S’well reusable bottles with the goal of displacing more than 54 million single-use plastic bottles in NYC.
According to the City, single-use plastic is a major source of preventable waste in the five boroughs. Nationally, Americans throw away enough plastic water bottles to fill the Empire State building one-and-a-half times each month. That is plastic that never goes away but breaks down and seeps into water and ultimately food, impacting public health. The production of plastic water bottles in the U.S. also uses 1.5 million barrels of oil a year, which is enough to power 250,000 homes or 100,000 cars all year.
“With humans around the world consuming a staggering one million plastic bottles per minute, we are thrilled to see the launch of the BRING IT campaign, putting NYC youth at the lead for reducing single-use plastic bottles,” said Debby Lee Cohen, executive director of Cafeteria Culture. “NYC’s BRING IT campaign will not only reduce the unacceptable amounts of fossil fuel derived plastics entering our oceans, landfills and incinerators, but can shift entire school communities away from costly and polluting single-use plastic to-go lifestyles and towards a healthy reusable culture. This is really a great way to drive home the concept that one simple local action can have a global impact!”
To celebrate the launch of the program, the Mayor’s Office of Sustainability, the Department of Education, and S’well kicked-off a five-day challenge to inspire and mobilize high school students to ‘bring’ not only their bottles, but their ideas, passions and unique perspectives to the challenge of creating a sustainable city. To that end, programming also includes the chance for NYC students in elementary to high school to participate in designing S’well’s 2019 Earth Day Collection and participate in activities that promote storytelling and sustainable change. The Department of Sanitation is also a supporting agency in BRING IT.
To learn more, stay up-to-date on BRING IT initiatives, and get involved, visit BRINGIT.NYC.
“Young people’s partnership and support is vital in creating a sustainable New York,” Sanitation Commissioner Kathryn Garcia added. “Students are the future of our city and programs like BRING IT are helping them reduce waste and empowering them to become active partners in reaching our city’s zero waste goals.”