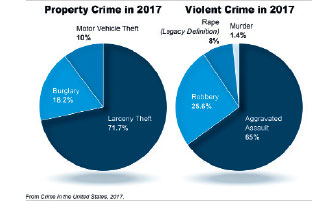 By Michael V. Cusenza
Overall violent crime, which covers murder and non-negligent manslaughter, rape, robbery, and aggravated assault, declined 0.2 percent in 2017 when compared with 2016 data, according to the Federal Bureau of Investigation’s annual compilation of crime statistics released on Monday.
The information in “Crime in the United States, 2017” was presented to the agency’s Uniform Crime Reporting Program by more than 16,000 law enforcement agencies across the country.
According to the national offense analysis, there were more than 1.2 million violent crimes reported to UCR nationwide in 2017. There was a 0.7-percent decrease in murders and a 4-percent decrease in robberies from 2016 to 2017.
However, there were an estimated 135,755 rapes reported to law enforcement in 2017. This estimate was 2.5 percent higher than the 2016 estimate, and 19.4 percent higher than the 2013 estimate.
Other violent crime highlights in this year’s FBI report:
• When considering five- and 10-year trends, the 2017 estimated violent crime total was 6.8 percent above the 2013 level, but 10.6 percent below the 2008 level.
• There were an estimated 382.9 violent crimes per 100,000 inhabitants in 2017, a rate that fell 0.9 percent when compared with the 2016 estimated violent crime rate, and dropped 16.5 percent from the 2008 estimate.
• Aggravated assaults accounted for 65 percent of violent crimes reported to law enforcement last year. Robbery offenses accounted for 25.6 percent of violent crime offenses; rape accounted for 8 percent; and murder accounted for 1.4 percent.
• Information collected regarding types of weapons used in violent crime showed that firearms were used in 72.6 percent of the nation’s murders, 40.6 percent of robberies, and 26.3 percent of aggravated assaults.
Property crime, which includes burglary, larceny-theft, motor vehicle theft, and arson, also declined—3 percent—from 2016 to last year. According to the report, there were more than 7.7 million property crimes in 2017. Burglaries decreased 7.6 percent and larceny-thefts decreased 2.2 percent. However, motor vehicle thefts increased 0.8 percent from 2016 to 2017.
The “Crime in the United States, 2017” property offense overview:
• The 10-year trend showed that property crimes decreased 21.3 percent in 2017 when compared with the 2008 estimate.
• In 2017, the rate of property crime was estimated at 2,362.2 per 100,000 inhabitants, a 3.6-percent decrease when compared with the 2016 estimated rate. The 2017 property crime rate was 13.6 percent less than the 2013 estimate and 26.5 percent less than the 2008 estimate.
• Larceny-theft accounted for 71.7 percent of all property crimes in 2017. Burglary accounted for 18.2 percent, and motor vehicle theft for 10 percent.
• Property crimes in 2017 resulted in losses estimated at a staggering $15.3 billion.
“We want to have greater transparency and accountability in policing. One way to get there is by improving the data,” said FBI Director Chris Wray. “That data will give us a more complete picture of what’s really going on in our communities and allow us to do what we need to do to keep people safe.”