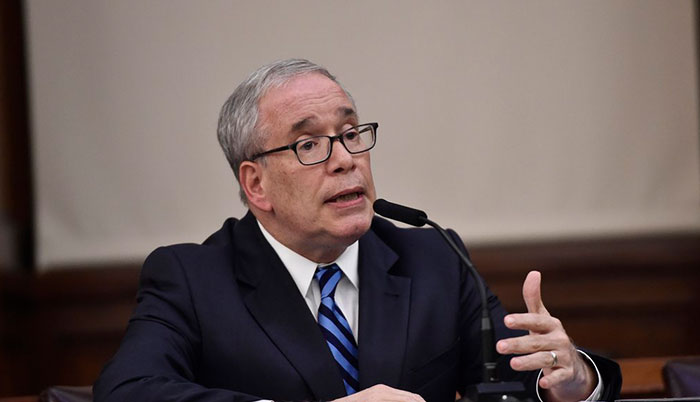 Comptroller Stringer testified on Thursday before the 2019 Charter Revision Commission.

By Forum Staff
As the 2019 City Charter Revision Commission last week kicked off its initial public hearings, Comptroller Scott Stringer released a new report detailing 65 recommended changes—many of them significant—to the governing document that is often referred to as NYC’s constitution.
Among the proposals in “A New Charter to Confront New Challenges,” Stringer is calling for a Chief Diversity Officer in every City agency, giving greater urban planning expertise to community boards, strengthening building-code enforcement, and establishing procurement timeframes. It also covers topics such as cybersecurity, adopting instant runoff voting, strengthening services for children citywide, and strengthening the campaign finance system, among others.
The comptroller’s analysis is organized in three sections: Creating a Fairer, More Equitable New York; Building a 21st Century Government; and Demanding Accountability & Transparency.
In the first section, Stringer outlines one of the primary recommendations of the report: the creation of the Chief Diversity Officer position inside the mayor’s cabinet and within each City agency, a role tasked with overseeing minority and women business enterprise programs, tracking and measuring diverse talent, and encouraging M/WBEs to bid on city contracts.
“We’ve seen firsthand in the Comptroller’s Office that a Chief Diversity Officer helps break down walls and transform how agencies invest in city businesses with an eye toward equity,” Stringer noted. “Without this position, we perpetuate a system that fails to build wealth in communities that have historically been left behind.”
Additionally in the Creating a Fairer, More Equitable New York section, Stringer recommends the amended City Charter:
• Require Community Boards to hire a full-time qualified urban planner with a degree in urban planning, architecture, real estate development, public policy or similar discipline and include the necessary budget appropriations to fund this position;
• Create a new office of long-term planning that can help growing communities foresee infrastructure challenges down the road; and
• Be updated to create a public process for reviewing the City Environmental Quality Review framework.
The comptroller focuses on construction in the five boroughs in the second section of his report. In it he proposes creating a new Office of Inspection, which will be responsible for all building and housing inspection and remediation. Such responsibilities should be removed from the Department of Buildings and Housing Preservation and Development so that they can focus more on their other respective responsibilities.
And in the Demanding Accountability & Transparency section, Stringer suggests: structuring the capital budget to allow the public to identify and understand the cost of individual capital projects; providing better and more comprehensive information about the condition of capital assets; and reporting on the changes in the cost and status of capital projects.
“Since the last major charter revision nearly 30 years ago, New York City has grown by 1.2 million people and the world has changed around it, yet its charter is not prepared to meet the needs of today’s challenges,” Stringer said. “The Charter Revision Commission is an opportunity for us to build a better government that takes aim at our affordability crisis and builds a fairer city by giving a voice to New Yorkers.”