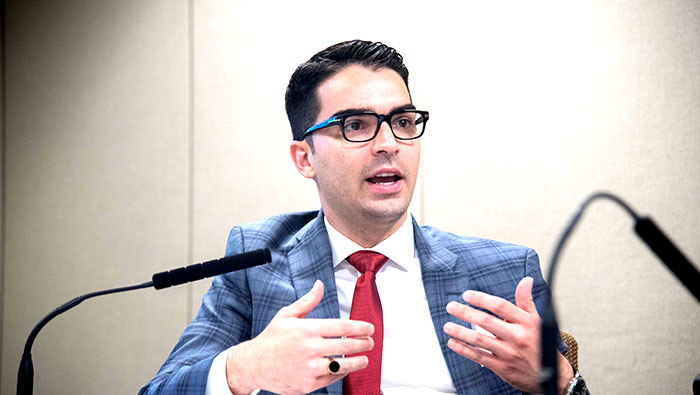 Councilman Eric Ulrich this week announced his intention to run in the special election for Public Advocate.

After weeks of speculation, City Councilman Eric Ulrich (R-Ozone Park) announced on Monday that he is running for Public Advocate in the upcoming special election for the citywide post that Tish James will vacate on Jan. 1 when she is sworn in as State attorney general.

Ulrich, 33, made it official with a 70-second YouTube video filmed in his native Ozone Park.

“Now, more than ever, New Yorkers are looking for someone who’s willing to stand up to Mayor de Blasio and his so-called progressive agenda,” Ulrich said.

For years, the councilman, who has represented South Queens on the council since 2009, has been quite vocal about his disdain for de Blasio and his politics, often relishing his role as the wily fly in Hizzoner’s liberal liniment.

“If you ask the mayor who on the City Council annoys him the most,” Ulrich said at a 2017 Howard Beach Lindenwood Civic meeting, “he’ll tell you it’s me.”

The YouTube clip presents more of that anti-de Blasio bravado. Ulrich uses the platform to make his case as the best man to bring checks and balances back to Gotham politics.

“I’m running for Public Advocate because I believe that we as a city deserve better, and because I want to give a voice to the majority of New Yorkers who this mayor continues to ignore,” Ulrich said. “Time and time again, this mayor has let us down, or he sold out the people of this city in exchange for a campaign contribution or a political favor. It’s no secret that it’s the special-interest groups and the lobbyists that are calling the shots at City Hall. It must end. And it can end.”

Ulrich enters an already crowded fray. On Wednesday, Gotham Gazette estimated that there are “roughly two-dozen candidates who have officially declared or indicated they are exploring a run in the expected February special election for New York City Public Advocate.”