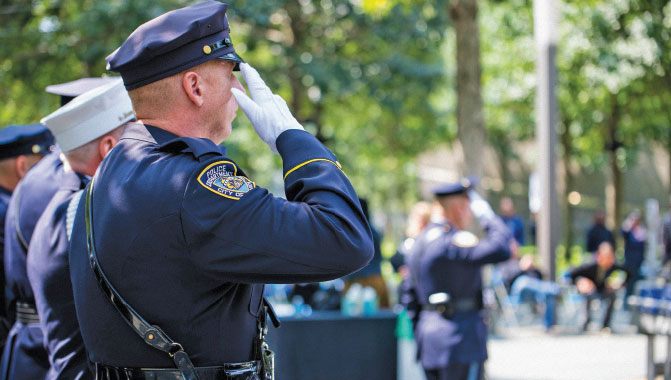 Lost among the tall political weeds of dissecting every syllable of President Trump’s loony tweets and the seemingly never-ending sound bites emanating from the small village of candidates seeking the Democratic presidential nomination is a once-in-a-blue-moon bipartisan achievement that we can support.
Senators Kirsten Gillibrand (D-N.Y.) and Chuck Grassley (R-Iowa) on Monday announced legislation to update the first responders federal benefits program so that first responders and their families can receive the full benefits they deserve. The Protecting America’s First Responders Act would allow the Department of Justice to change the Public Safety Officers’ Benefits program, which provides death benefits to the survivors of officers who die or are disabled in the line of duty, so that awards are calculated based on the date of award, regardless of the date of injury. The measure would help ensure that 9/ 11 first responders and their families, who are currently considered “injured” on Sept. 11, 2001, can receive the current allocated amount of funding.
• According to Gillibrand and Grassley the Protecting America’s First Responders Act would specifically: Require that the disability or death benefit award amount is based on the date of the adjudication rather than the date of the injury. This would account for increases in the cost of living that may occur during lengthy adjudication periods;
• Update the PSOB program’s definition of “disability” to ensure that officers who are permanently unable to find gainful employment following a catastrophic injury in the line of duty can remain eligible for benefits;
• Ensure that applicants who have been denied benefits in the past three years as a result of the current standards could be able to re-apply using the updated definition; and
• Guarantee retroactive education assistance for eligible survivors who pay out-of-pocket education expenses while awaiting the adjudication of a claim.
The PSOB program was established by Congress in 1976 to provide death benefits to the survivors of officers who die in the line of duty. The law has expanded to provide disability and education benefits, as well as to expand the pool of officers who are eligible for these benefits. The program provides disability or death benefits in a one-time lump sum payment, which is adjusted yearly based on the consumer price index. The program has also been marked by delayed adjudication of death and disability claims. In some cases, claims have taken years to process. A lack of DOJ guidelines for adjudicating disability claims has also resulted in PSOB benefits being denied to officers whose work-related injuries would result in a disability determination under the Social Security Administration’s guidelines.
“Our first responders have a dangerous job and they take extraordinary risks to keep the rest of us safe. When tragedy strikes and a first responder loses their life or becomes disabled because of their heroic work, Congress has a responsibility to look out for their family in return,” Gillibrand said. “I am proud to join Senator Grassley in introducing the bipartisan Protecting America’s First Responders Act. This bill would make sure that the families of our fallen 9/11 heroes and so many other brave first responders are receiving compensation from the government that reflects what they and their children need. I urge my colleagues to do the right thing, fight with me for our first responders, and quickly pass this bipartisan bill.”
We couldn’t agree more, Sen. Gillibrand. Pass the bill. After all, truly bipartisan achievements are hard to come by.