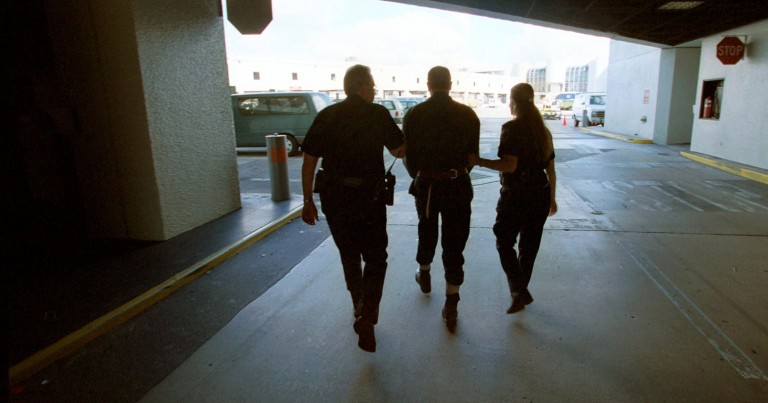 By Michael V. Cusenza
A U.S. Customs and Border Protection officer has been charged with stealing cash out of bags belonging to arriving passengers at John F. Kennedy International Airport from April 2018 to April 2019, federal prosecutors announced on Thursday.
Joseph Cialone, 39, of East Meadow, L.I., was released on $50,000 bond after his arraignment Thursday.
According to the six-page complaint, on Thursday, agents from the CBP Office of Professional Responsibility surveilled Cialone via live video as he patrolled Terminal 4 at JFK Airport. Agents observed Cialone conduct multiple border-enforcement exams of passengers from Caribbean Airlines flight number BW 726, arriving from Georgetown, Guyana. In at least two of those exams, Cialone, who was wearing latex gloves on both hands, searched a female with a large handbag, and after he removed his gloved hand in a fist from those bags, he took off the glove and placed it in his pocket.
The agents subsequently approached Cialone and cuffed him. During a search of Cialone’s person and property, the agents recovered three latex gloves, two of which contained hundred-dollar bills.
In a private room at a CBP facility near the airport, Senior Special Agent Andrew Millar read Cialone his Miranda rights. Cialone indicated to Millar that he understood said rights and agreed to waive them.
“Thereafter,” Millar wrote, “Cialone stated…that he has stolen one-hundred-dollar bills from passengers’ handbags on at least 100 occasions over the past year, during which he was assigned to the Smuggling Interdiction Unit. Cialone further stated that he only searched deep handbags, because it is easier to conceal his movements. And then, after stealing the currency, he would go to the bathroom, where he would place the stolen money in his wallet.”