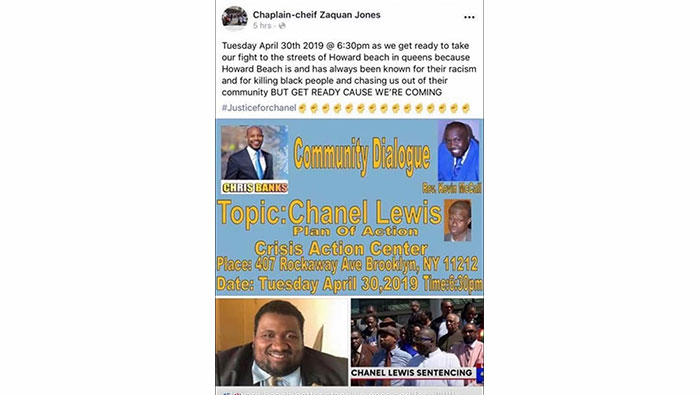 By Michael V. Cusenza
An alarming Facebook post circulated by supporters of the man recently convicted of killing Karina Vetrano had the Howard Beach community on edge this week.
The post features a flier promoting a “Community Dialogue” event in Brooklyn. “Topic: Chanel Lewis Plan of Action,” the digital handbill reads before noting that the confab is set for Tuesday, April 30, at 6:30 p.m. at the Crisis Action Center on Rockaway Avenue.
However, the words that punctuated the flier seemed to spark anxiety levels in the South Queens neighborhood.
“Tuesday April 30th @ 6:30pm as we get ready to take our fight to the streets of Howard beach in queens because Howard Beach is and has always been known for their racism and for killing black people and chasing us out of their community BUT GET READY CAUSE WE’RE COMING #Justiceforchanel,” Chaplain-chief Zaquan Jones wrote above the flier.
Before long, the e-rumor mill feasted on the reckless speculation of a hostile demonstration or rally that would begin in East New York and make its way to Cross Bay Boulevard.
Deputy Inspector Brian Bohannon, commanding officer of the 106th Precinct, quelled the angst Tuesday evening at the Howard Beach Lindenwood Civic meeting.
“It’s not happening, nothing’s happening, nothing’s going on,” he said, eliciting applause from area residents. Bohannon noted that he reached out to borough commanders for extra manpower just in case.