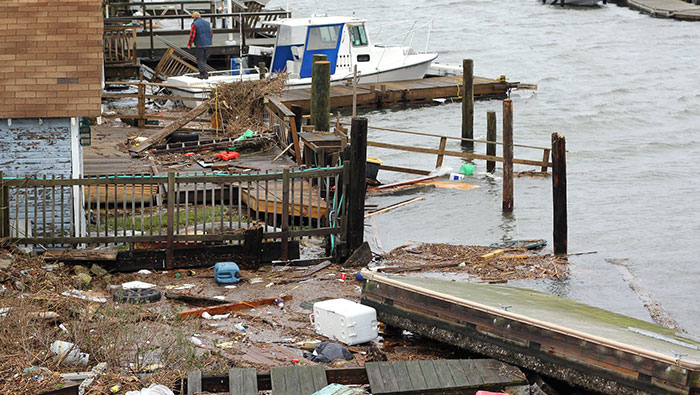 “[F]looding has damaged our homes and our vehicles but more importantly affected our peace of mind!” Gendron wrote earlier this year.

By Michael V. Cusenza
The refrain from beleaguered South Queens homeowners was familiar: berms, barriers, levees. Now.
Dozens of residents of historically vulnerable neighborhoods gathered at Our Lady of Grace Catholic Academy in Howard Beach on Saturday for the New Hamilton Beach Civic Association’s second Protect Our Community meeting, signing letters that demand answers on coastal flood protection measures for their beloved communities from elected officials and, perhaps most importantly, the U.S. Army Corps of Engineers.
NHBCA President Roger Gendron has said that the massive damage caused by Superstorm Sandy in the area “could have been avoided” if the corps had not “dropped the ball” regarding enhanced measures.
“As everyone remembers all too well, during Sandy the water from Shellbank Basin crested the bulkhead along Crossbay and sent a wave of water across the boulevard, down the avenues, down the side streets and unfortunately into many homes,” Gendron wrote earlier this year on his exhaustive “Coastal Flood Protection for Hamilton Beach and Howard Beach” petition on change.org. “The businesses on Crossbay Blvd suffered major losses with some so great that some businesses were not able to recover.”
The petition has garnered more than 1,000 digital signatures.
“Hamilton Beach and Howard Beach are currently at risk of frequent tidal flooding. The persistent tidal flooding that our community has been experiencing over the last 20 years has only increased as tidal flooding, which in the past occurred once or twice a year, now happens sometime once, twice or MORE each month. The flooding has damaged our homes and our vehicles but more importantly affected our peace of mind!” he wrote. “In the mid 1960s, a major study was completed for Jamaica Bay. This came in the aftermath of extensive damage caused by Hurricane Donna in 1960 and a major nor’easter in March 1962. The plans included a recommendation for hurricane protection along the perimeter of the Howard Beach area using berms, levees, storm barriers and interior drainage in and around Hawtree and Shellbank basins. The Flood Act of 1965 passed the Senate and House and was signed by President [Lyndon] Johnson and became Public Law 89-298, however nothing ever came of it. Now we jump ahead over 50 years and the only thing that has been done is study after study. The current study which includes a massive barrier from Sandy Hook NJ to Breezy Point NY will do nothing to protect the most vulnerable communities around Jamaica Bay, including my own.”
Gendron has requested that the USACE “reevaluate the plan that was made into public law in 1965 and build the berms and flood gates along the northern side of Jamaica Bay which would Protect Our Community!”
Additionally, Gendron, on the petition, cautions area residents regarding the Spring Creek South Storm Resilience and Ecosystem Restoration Project, which “is supposed to reduce the risk of storm damage and flooding to the Howard Beach neighborhood but not all of Howard Beach.
“While the Spring Creek project will protect the most south western portion of New Howard Beach, the rest of our community still remains vulnerable,” Gendron concluded. “Old Howard Beach & Hamilton Beach will NOT be protected. It just doesn’t make sense. It’s almost like locking your backdoor but leaving the front door wide open.”
For more information, visit change.org/p/coastal-flood-protection-for-hamilton-beach-and-howard-beach.