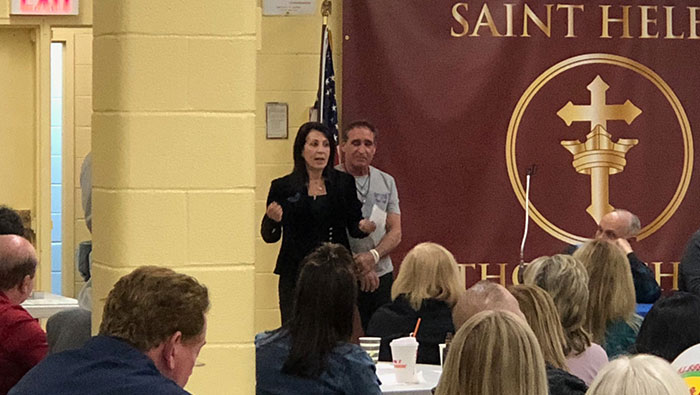 “Your love, support, and prayers and generosity has held us up throughout this nightmare that never ends,” Cathie Vetrano said Tuesday at the Howard Beach Lindenwood Civic meeting.

By Michael V. Cusenza
The parents of slain jogger Karina Vetrano on Tuesday thanked Howard Beach residents for their backing and loyalty over the last three years.
“Your love, support, and prayers and generosity has held us up throughout this nightmare that never ends,” Karina’s mom, Cathie Vetrano, said to a packed St. Helen Catholic Academy cafeteria during the Howard Beach Lindenwood Civic meeting.
Cathie Vetrano choked back tears as she also showed appreciation for the actions and encouraging words of Deputy Inspector Brian Bohannon and the 106th Precinct since August 2016.
“I’ve seen a lot of evil—but I’ve seen a lot more love than evil throughout all of this,” she said. “I thank you and love you. I’m so proud to come from Howard Beach. We’re strong, good people.”
The community leaders and residents in attendance gave Cathie and Karina’s father, Phil, a standing ovation as they made their way back to their seats following their expression of gratitude.
Bohannon also delivered remarks Tuesday evening as he detailed the community crime figures. Overall crime is down 7 percent year to date. However, the last four weeks have seen an uptick felony assaults, burglaries, and grand larcenies.
“I hate to say it, but we’re kind of fighting our own success,” the precinct commander posited.
Tires and rims are once again a hot commodity—especially in Lindenwood and Howard Beach. And fraud is still a big problem in the 106, Bohannon noted.
“Always monitor your accounts,” he warned.