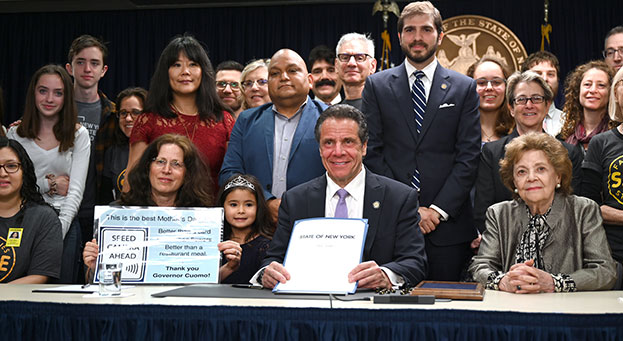 By Michael V. Cusenza
Governor Andrew Cuomo on Sunday signed legislation to reinstate the speed camera program in the five boroughs and expand the number of authorized school speed zones from 140 to 750. The bill also broadens the hours of the program to weekdays between 6 a.m. and 10 p.m.
The measure reinstates and expands a bill signed by Cuomo in 2013 authorizing the City to develop the program using camera technology to record and enforce speeding violations in school zones. Upon the program’s expiration in July 2018, and after the Republican-controlled Senate failed to extend the authority before the end of the legislative session, Cuomo signed an executive order that August declaring a state of emergency in New York City and reinstating the speed camera program. The order temporarily suspended the sunset provisions in the program legislation, providing the City with the authority it needed to implement it ahead of the school year.
The executive order also directed the State Department of Motor Vehicles to help the City implement the program in time for the 2018 school year. The DMV granted the City Police Department access license records, a crucial component of the speed camera system.
“Speed cameras work. It is just undeniable. They work on the numbers,” the governor said. “A person who gets hit by a vehicle going 30 miles per hour is twice as likely to die as a person hit by a car going 25 miles per hour. That five miles per hour between 25 and 30 doubles the likelihood that the person will be killed. Just think about it. Since the speed cameras have gone in, fatalities in school zones have decreased 55 percent. So it’s common sense. It works. We know it works. Why don’t you do more of it?”
Cuomo also noted that the new law mandates that the City prioritize placement of the cameras by speed and crash data. The bill also indicates that motorists will be notified that they’re entering a speed zone.
“There is no greater message on Mother’s Day than doubling down on our commitment to ensuring the safety of our students getting to and from school,” said Lt. Gov. Kathy Hochul. “No parent should have to question whether or not they’ll see their child again at the end of the day. This legislation allows for the expanded operation of speed cameras around schools in New York City. Speed cameras are vital to monitor traffic and keep our students free from harm, helping to save lives.”
Assemblywoman Deborah Glick (D-Manhattan) added, “This bill is the culmination of several years’ work to ensure that all children, their caregivers, and school staff are protected against the dangers of speeding motorists as they travel to and from school. Since passing a demonstration program in 2013, locations with cameras saw speeding violations drop more than 60 percent and traffic fatalities drop by 55 percent. This session we were able to put children’s safety above political posturing and secure this hard-fought victory for pedestrian and cyclist safety.”