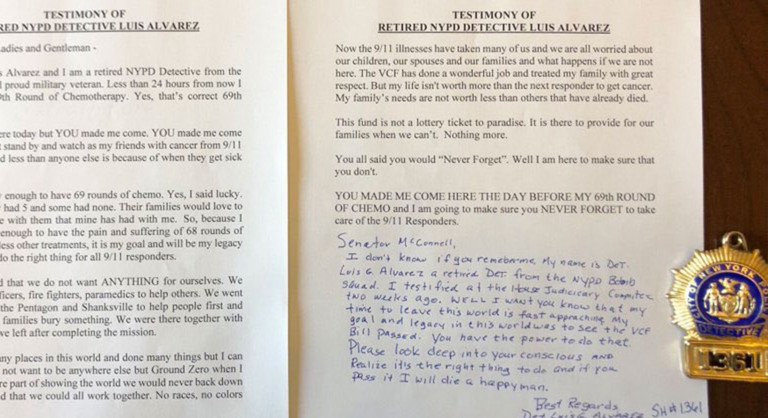 By Michael V. Cusenza
City Councilman Eric Ulrich (R-Ozone Park) didn’t mince words when he recently ripped U.S. Sen. Rand Paul (R-Ky.) for being one of just two senators who voted against the bill to make the September 11th Victim Compensation Fund permanent.
“Well once again, @RandPaul proves himself to be a piece of sh*t. I say that as a lifelong New Yorker and Republican,” Ulrich posted on Twitter.
Paul and Sen. Mike Lee (R-Utah) voted “no” on the “Never Forget the Heroes: James Zadroga, Ray Pfeifer, and Luis Alvarez Permanent Authorization of the September 11th Victim Compensation Fund Act” reportedly due to concerns regarding compensation costs for federal taxpayers. The bill passed the Senate last week, 97-2, after already getting the thumbs-up (402-12) from the House of Representatives.
“This bill sends a powerful signal from our nation, from Congress, and from all the people we represent in all 50 states that we will never forget what our 9/11 heroes did for us,” said Sen. Kirsten Gillibrand (D-N.Y.). “This bill is for every single person who decided in that terrible moment – when we were attacked, when we were vulnerable, and we were scared – to do the unthinkable: to risk their lives for total strangers and sacrifice their bodies for our country. It is for every person who spent days, weeks, and months on the pile, and has had to suffer physical and mental scars for years because of that heroic work. It is for every survivor who lived in a home or went to school downtown when the government told them the air was safe to breathe. The Senate promised that we would ‘never forget,’ and today we finally lived up to that promise. We will never forget our 9/11 heroes and we will never stop helping them when they are in need – and now, once and for all, they can finally exhale and go home to be with their families. This day is long overdue, and now I urge President Trump to immediately sign this bill into law.”
On Feb. 15, September 11th Victim Compensation Fund announced that due to a funding shortfall, injured and ill Sept. 11 responders and survivors will receive cuts to the awards that they were expecting of 50 percent for pending claims and 70 percent for future claims.
In the years since Sept. 11, 2001, thousands of first responders and survivors have become ill and many have lost their lives from exposure to a toxic cocktail of burning chemicals, pulverized drywall and powdered cement that was present at Ground Zero. After years of urging Congress to act, in 2010 and again in 2015, legislation was passed to provide medical monitoring and treatment through the World Trade Center Health Program until 2090. However, the September 11th Victim Compensation Fund was only extended until 2020 and the money is already running out. Now, thousands are facing dramatically reduced awards and without this legislation, the VCF will actually be closing next year just as thousands more responders and survivors are expected to be diagnosed with Sept. 11-related cancers.
The new legislation is designed to ensure that the VCF is fully funded and will remain open for those who will become ill in the future, Gillibrand said.