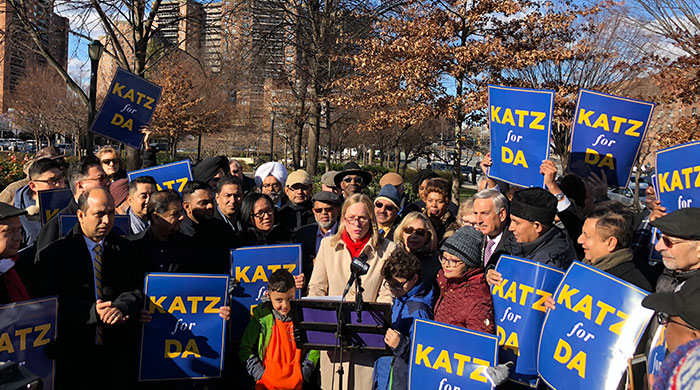 Photo Courtesy of the Katz Campaign

By Michael V. Cusenza
It’s official—for now, at least.
Following a recount, the City Board of Elections on Monday declared that Queens Borough President Melinda Katz beat upstart public defender, Tiffany Cabán, by a mere 60 votes.
Cabán has vowed to take the fight to court. But the BOE has indicated she has no case.
“The parties were given full, fair, open and transparent access to every step of these proceedings,” said BOE Executive Director Michael Ryan, according to the New York Post. “At the conclusion, the faith of the public will rest easy.”
Forest Hills native and resident Katz is already looking ahead.
“While it is everyone’s right to avail themselves of the judicial process, I urge all participants in this hard-fought election to come together and join me in beginning the hard work of reforming the criminal justice system in Queens,” she said in a statement.
Monday’s official declaration is the latest stop on what has been a wild rollercoaster ride of a race. Cabán shocked most pundits by seemingly striking an upset win way back on primary night on June 25. As of Wednesday, June 26, the Richmond Hill native led Katz by nearly 1,100 tallies following an election day marred by a paltry turnout (roughly 90,000 voters).
“We won the District Attorney’s Office!” Cabán, 31, beamed to her elated supporters at her election night party in Woodside.
Katz, 53, and her allies would not concede.
“I want everyone to know we are doing a recount,” she asserted at her own reception in Forest Hills.
“This thing ain’t over folks,” Queens Democratic Party Chairman Greg Meeks added. “Every vote will be counted.”
After approximately 4,000 absentee ballots were counted in the week after the primary, Katz took a razor-thin 16 vote advantage. And according to the BOE, a recount of all ballots is required when the margin of victory is less than one half of one percent of all votes.
Under the watchful eyes of attorneys on both sides, BOE staffers manually recounted all tallies at the agency’s Queens voting machine facility inside of Metro Mall in Middle Village.
In the end, Katz bested Cabán 34,920 to 34,860.
In a heavily Democratic borough, Katz is expected to cruise past the GOP nominee, which as of press time is Daniel Kolgan.