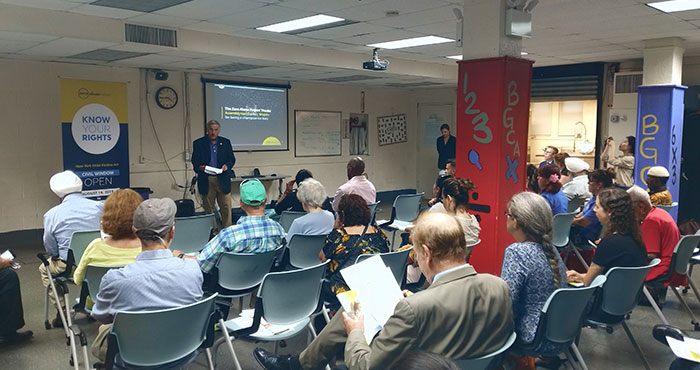 Assemblyman Weprin addresses attendees at the Boys and Girls Club of Metro Queens in Richmond Hill.

By Michael V. Cusenza
With several crucial aspects of the Child Victims Act set to kick in this month, the Boys and Girls Club of Metro Queens in Richmond Hill recently hosted a free seminar featuring child-welfare advocates, clinicians, elected officials, and sexual abuse prevention experts to help lead a discussion about the new measure and what it means for survivors still seeking justice.
Governor Andrew Cuomo signed the CVA into law in February. Cuomo said he had advocated for passage of the CVA during the 2018 legislative session “but Senate Republicans refused to bring it to the floor for a vote.”
“This bill brings justice to people who were abused, and rights the wrongs that went unacknowledged and unpunished for too long,” the governor said. “By signing this bill, we are saying nobody is above the law, that the cloak of authority is not impenetrable, and that if you violate the law, we will find out and you will be punished and justice will be done.”
State Sen. Brad Hoylman (D-Manhattan) added earlier this year, “For years, survivors of child sexual abuse looked to Albany for justice and for years, their pleas went unanswered. No longer. With the Child Victims Act now signed into law by Gov. Cuomo, survivors of child sexual abuse in New York State finally have the opportunity to seek justice against their abusers and the institutions who may have harbored them.”
Last week, dozens of borough residents gathered at the Atlantic Avenue B & G club to learn more about how the CVA expands New York’s statute of limitations (the deadline an individual has to initiate legal proceedings). Beginning Aug. 14, survivors over the age of 23 will be able to utilize a one-year window, known as the “look back” period, to file a civil lawsuit against perpetrators or institutions regardless of when the offense took place.
Furthermore, the CVA also raised the statute of limitations for criminal actions and civil actions. The criminal statute of limitations will be extended five years to 23 from age 18; and the civil statute of limitations will be extended to 55 from 23.
“It is my hope that local community members will be able to use the information from this seminar to seek justice for themselves or help others in their community seek justice,” said Assemblyman David Weprin (D-Richmond Hill). “The Child Victims Act is a historic victory for child sex abuse survivors and we need to make sure that people know how to use it to hold their victimizers accountable.”
Jeffery Dion, executive director of the child sex abuse survivor advocacy nonprofit Zero Abuse Project, called the CVA “our most powerful tool to stop abuse and protect kids.”
“I want to thank Assemblyman Weprin for his efforts to assist survivors and protect the children of New York from future abuse,” Dion continued. “Because of this work, under the Child Victims Act, survivors of child sexual abuse can now seek justice and hold predators and the institutions that covered for them accountable for decades of abuse. Moving forward, the new law also removes the perverse incentives for institutions to cover abuse as they can no longer just wait out a short statute of limitations to protect their reputation.”