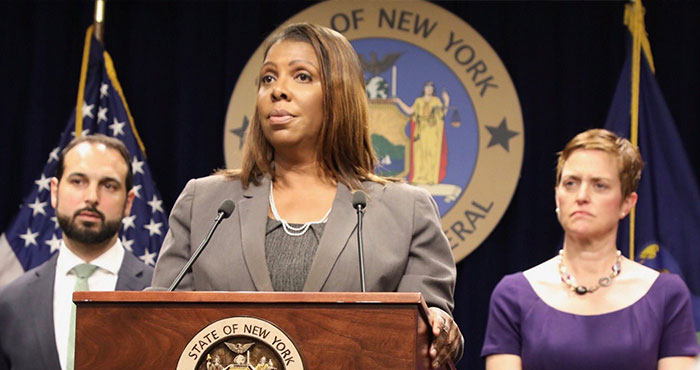 “Opioids are devastating communities across the country, and we have a duty to do all we can to protect Americans from this epidemic,” AG James said Monday.

By Michael V. Cusenza
State Attorney General Tish James, along with a coalition of 38 states, sent a letter Monday to Congress urging the Legislative Branch to remove federal barriers that are currently preventing healthcare providers from offering treatment for opioid-use disorder.
According to the U.S. Centers for Disease Control and Prevention, opioid-use disorder is the physical and psychological reliance on opioids; it is estimated that more than two million Americans struggle with opioid-use disorder. In 2018, more than 47,500 Americans died from opioid-related overdoses.
In the missive to congressional leadership, the bipartisan coalition calls for the passage of legislation to: eliminate burdensome requirements that prohibit doctors from prescribing treatment for opioid-abuse disorder; replace outdated medical privacy rules; and repeal a rule that prevents Medicaid from covering some forms of treatment.
In the six-page letter, the coalition outlines three primary areas, which need to be addressed by the Senate and House of Representatives:
• Replace the cumbersome, out-of-date, privacy rules contained in 42 CFR Part 2 with the effective and more familiar privacy rules contained in the Health Insurance Portability and Accountability Act;
• Pass HR 2482, the Mainstreaming Addiction Treatment Act, which would eliminate unnecessary burdens on buprenorphine prescribing imposed by the Drug Addiction Treatment Act of 2000. Buprenorphine is one of three drugs used as part of Medication Assisted Treatment, the most effective treatment for opioid-use disorder. Outdated and unnecessary federal requirements are discouraging doctors from prescribing this life-saving drug to patients who need it; and
• Fully repeal the Medicaid Institutions for Mental Diseases exclusion. The IMD exclusion generally prohibits state Medicaid programs from receiving federal reimbursement for adults between 21 and 65 receiving mental health or substance-use disorder treatment in a residential treatment facility with more than 16 beds.
“Opioids are devastating communities across the country, and we have a duty to do all we can to protect Americans from this epidemic,” James said Monday. “New York has filed the nation’s most extensive lawsuit against the makers and distributors of opioids, we’ve taken drug dealers off the streets, and now we are ensuring that impacted individuals can access the treatment they need. This crisis demands action from every angle and that is exactly what we are doing.”
In March, James filed a 269-page complaint in Suffolk County Supreme Court that alleges that through years of false and deceptive marketing, and by ignoring their duties to prevent the unlawful diversion of controlled substances, six national prescription opioid manufacturers—Purdue Pharma and its affiliates; members of the Sackler family (owners of Purdue) and trusts they control; Janssen Pharmaceuticals and its affiliates (including its parent company Johnson & Johnson); Mallinckrodt LLC and its affiliates; Endo Health Solutions and its affiliates; Teva Pharmaceuticals USA, Inc. and its affiliates; and Allergan Finance, LLC and its affiliates—and four national prescription drug distributors—McKesson Corporation; Cardinal Health Inc.; Amerisource Bergen Drug Corporation; and Rochester Drug Cooperative Inc.—are largely responsible for creating the opioid epidemic that has ravaged the Empire State, causing widespread addiction, overdose deaths, and suffering.
“Since 1999, the scourge of opioid addiction unleashed by the Defendants in this action has taken nearly 400,000 lives,” the complaint reads.