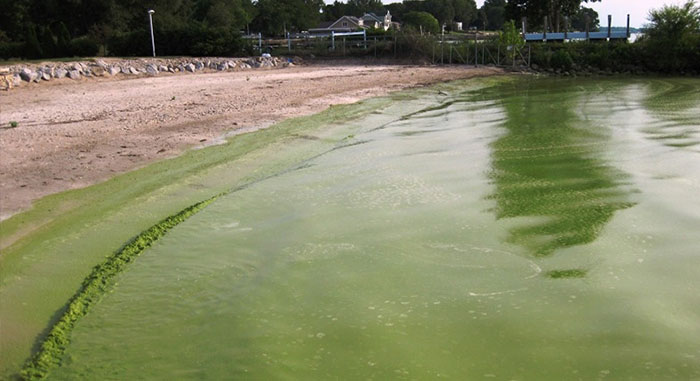 Blue-green algae bloom on the shore of Catawaba Island, Ohio, in Lake Erie.

By Forum Staff
The American Society for the Prevention of Cruelty to Animals is alerting pet owners to the severe threats that blue-green algae pose to pets.
According to the ASPCA, algae intoxications happen more during this time of year because conditions promote the growth of cyanobacteria. These organisms are known to cause poisoning in dogs, cats, livestock, wildlife, birds, fish and even humans. In the warm, summer months, pet owners should take caution when bringing companion animals near stagnant ponds, lakes, and other bodies of fresh water that could potentially be contaminated with algae.
Pet owners should be aware of these important facts, according to the ASPCA:
• Blue-green algae is most likely to proliferate in bodies of fresh water when the weather is warm (over 75 degrees) and sunny.
• Water containing toxic algae blooms will often have the appearance of a pea-green paint or slime on the surface.
• If certain wind conditions are present, the film will often concentrate along the shoreline in areas where animals may drink or swim.
The organization added that dogs can develop poisoning when they drink from or swim in contaminated water sources. If blue-green algae is consumed, it can cause severe neurologic or liver damage. Signs of blue-green algae toxicity include seizures, panting, excessive drooling, respiratory failure, diarrhea, disorientation, vomiting, liver failure, and ultimately death.
The ASPCA also indicated that prevention is key. Don’t allow your pets to drink from stagnant ponds, lakes or other bodies of water that have bluish-green scum on the surface or around the edges. Blue-green algae cells can also stick to a pet’s fur and be ingested when the animal cleans itself, so take caution before allowing your pet to jump into a body of water.