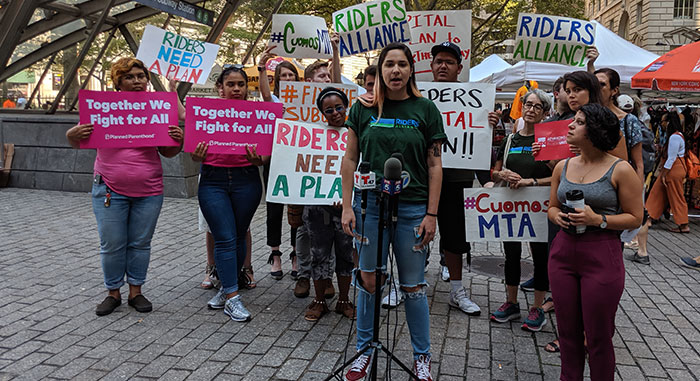 “We need to hear from real riders about what they need fixed on the subway and how the problems impact their lives. It’s important to hear from transit riders like me,” RA member Lola Vieira said on Thursday near MTA headquarters.

By Michael V. Cusenza
A leading public transportation commuter-advocacy group on Thursday began its own riders’ capital planning process, collecting straphangers’ perspectives about what Gov. Andrew Cuomo should prioritize as the Metropolitan Transportation Authority modernizes New York’s ancient transit system.
The Riders Alliance has already begun to poll commuters’ top priorities for MTA spending, and the organization has promised to send the results to the governor’s office.
The MTA is scheduled to release its capital plan next month. The fiscal strategy, which Cuomo will announce and the MTA Board will adopt this fall, is a five-year projection of how the agency will spend tens of billions of dollars, including money from congestion pricing, on major upgrades to the region’s transit network.
“We need to hear from real riders about what they need fixed on the subway and how the problems impact their lives. It’s important to hear from transit riders like me,” RA member Lola Vieira said. “Recently, I talked to an actor, who told me he lost an audition to a Broadway play he could have been in. I heard from a young mother who was stuck in the recent meltdown during the heat wave, was an hour late to pick up her young child from childcare. This was not only stressful but she had to pay more overtime.”
New Yorkers who want to participate in the Riders Capital Plan should text SUBWAY to 52886, visit CuomosMTA.com, or use the hashtag #FixTheSubway on Facebook, Twitter, or Instagram. The alliance also indicated that riders should look out for live events in transit stations throughout the city in the coming weeks.