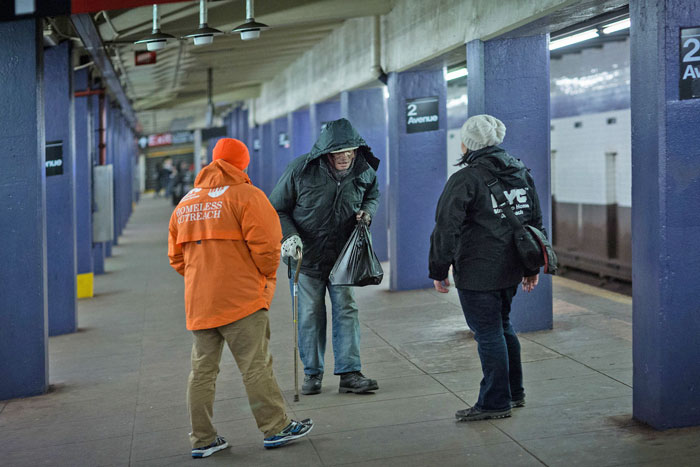 The administration is encouraging more homeless New Yorkers to accept services and transition out of the subways.

In an effort designed to encourage more homeless New Yorkers to accept services and transition out of the subways, the de Blasio administration on Thursday announced a series of enhancements to the City’s HOME-STAT outreach efforts underground.

According to the administration, the Department of Homeless Services and City Police Department are implementing a series of interventions and enhancements to more effectively target underground outreach efforts to high-activity areas and high-need cases, including launching:

According to the administration, in order to address the most challenging cases of unsheltered homelessness involving high-needs clients, who often face the most significant, often overlapping challenges, including mental health and substance misuse, the City is launching an interagency command center, bringing relevant agency experts to the table to develop tailored approaches to engaging each individual based on their unique needs. While the vast majority of individuals encountered by HOME-STAT outreach teams in the subway are transient, a specific subset of individuals confirmed to be experiencing unsheltered homelessness and known to outreach teams by name are considered “entrenched,” City officials noted, having been engaged 50 or more times throughout a one-year period, indicating greater need requiring more interagency expertise. Through close collaboration with the Department of Health and Mental Hygiene and Health + Hospitals, HOME-STAT outreach teams and NYPD will develop targeted interventions to make the breakthrough that encourages these individuals to finally accept services and transition off the subways, de Blasio administration officials added.

Additionally, the administration has indicated that it wants to build on the Manhattan Subway Diversion Pilot announced last month, which is diverting homeless New Yorkers from unnecessary criminal justice involvement towards shelter and services. The pilot will now be expanded to all five boroughs, according to the administration. Through this Subway Diversion Project, individuals experiencing unsheltered homelessness (i.e. having no active legal address at the time of engagement and not residing in shelter) encountered by the NYPD in the transit system (i.e. subway cars and subway stations) and observed to be in violation of City Transit Code of Conduct rules, such as fare evasion and lying outstretched, are being offered referrals to services in lieu of civil summonses.

“Since the launch of the HOME-STAT initiative, we’ve already brought more than 2,200 New Yorkers in off the streets and subways and into transitional and permanent housing programs, including more than 600 out of the subways specifically, who’ve remained off the streets—and by strengthening engagement, building trust, and providing more pathways off the streets, we’re squarely focused on taking that progress further,” said Department of Social Services Commissioner Steven Banks.