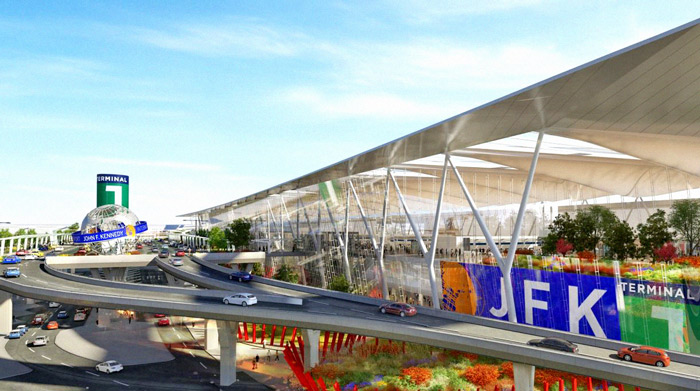 Rendering of the new Terminal 1 at JFK International Airport.

The RFP, released today by the Port Authority of New York and New Jersey, aims to secure a qualified firm to assist in the oversight of the performance of all contractors for the entire JFK Redevelopment Program. The selected firm also will provide construction management and coordination services with other ongoing construction projects related to the program.

According to the administration, the scope of the work for the RFP includes performing multi-discipline civil, structural, electrical, traffic, and mechanical engineering, and construction management and support services required for the program. Projects include the major terminals, design-build construction contracts for new parking garages and substations, as well as construction of elevated roadways, utility infrastructure improvements, airfield modifications including work on new taxiways, demolition of buildings, and extensive management of traffic during construction.

Cuomo announced last October that the JFK Redevelopment Community Advisory Council—composed of elected officials, community boards, nonprofit organizations, civic organizations, and clergy leaders and chaired by Queens Borough President Melinda Katz and U.S. Rep. Greg Meeks (D-Jamaica)—has been working with the Port Authority to expand community outreach efforts that are already underway, ensuring that the project solicits ongoing feedback from local stakeholders as well as provides opportunities for local businesses, Minority and Women-owned Business Enterprises and job seekers. The Port Authority has noted that it has encouraged not only qualified MWBE firms to respond to the RFP, but also MWBE subcontractors to partner with prime contractors.

“As we continue to advance the transformation of JFK Airport into a modern, world-class transit hub, we want to ensure that we have a proven partner on our side to help oversee and assess the progress we are making,” Cuomo said. “JFK is the international entry into New York State, and to enhance this major infrastructural undertaking, we are looking for management firms capable of executing the vision we have laid out.”

Cuomo’s multi-billion-dollar JFK Vision Plan calls for an overhaul of the airport’s eight fragmented terminal sites into one unified hub. This will be done, according to the State, by demolishing old terminals, utilizing vacant space, modernizing on-airport infrastructure, and creating a multi-tiered cargo modernization program, while incorporating the latest in passenger amenities and technological innovations.

As part of the plan, JetBlue and JFK Millennium Partners are constructing a $3 billion, 1.2 million-square-foot terminal on the airport’s north side that will connect to the airline’s existing Terminal 5. Additionally, a new $7 billion, 2.9 million-square-foot terminal on the airport’s south side will occupy the area where the existing Terminals 1 and 2 are located, in addition to the area left vacant when Terminal 3 was demolished in 2014. The new south side terminal will be developed by the Terminal One Group, a consortium of four international airlines—Lufthansa, Air France, Japan Airlines and Korean Air Lines. American Airlines and British Airways will invest $344 million over the next three years to renovate Terminal 8.

And in May, the TWA Hotel located just outside Terminal 5 opened its doors to the public.