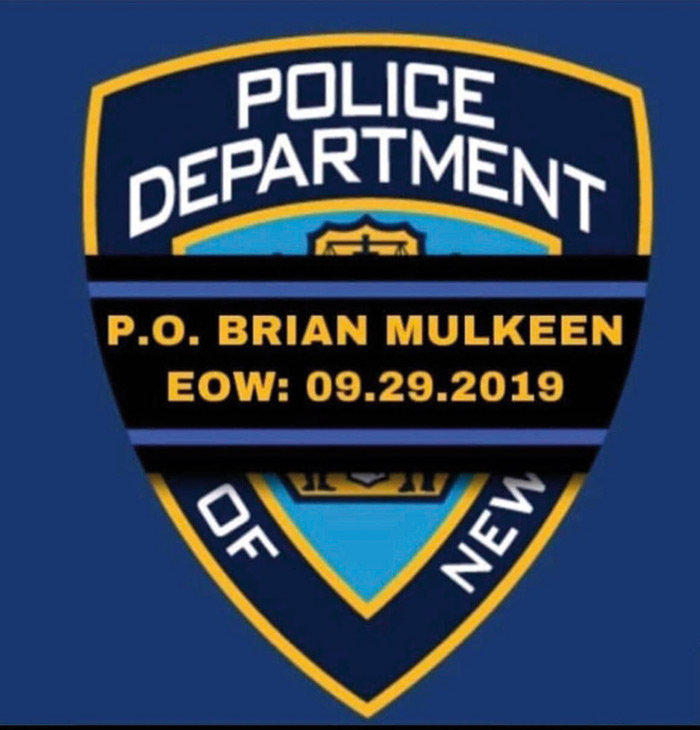 The City Police Department has had an especially arduous year. Nine Member of Service suicides. More names added in 2019 to the memorial list of cops who succumbed to Sept. 11-related illness. Two officers died in the line of duty as a result of friendly fire.

And we’ve still got three months to go.

The latest incident of fatal inadvertent gunfire snatched the life of Bronx cop Brian Mulkeen, 33, as he struggled on the ground with an armed suspected gang member.

Judging from all the tributes delivered by those that knew him best on the job, Mulkeen seemed to be that rare Gotham gem—a cop’s cop—though he had just six years under his belt.

He was so good at being one of the good guys, the finest of the Finest, that a Bronx teen whom Mulkeen had arrested a couple of years ago took to social media this week to deliver a sincere tribute to the officer who was “a real-life good man.”

“Officer Mulkeen arrested me in 2017 before and I’m not here to spread hate or harm I’m here to show my respect in my opinion …. he was one of the good guys,” the boy named Henry wrote, according to the New York Daily News. “Actually showed an interest in my well-being called my mom for a year to make sure I was staying out of trouble.

“You will be missed,” Henry said as if he were talking to Mulkeen right now in the 47th Precinct stationhouse.

Just as we wrote after Det. Brian Simonsen made the ultimate sacrifice in Richmond Hill in February—take time to thank a cop for what they do every day for this mammoth metropolis.

“The men and women of the NYPD routinely confront danger with remarkable courage, accepting the possibility that each goodbye spoken before they walk out the door could be their last. Officer Brian Mulkeen displayed such resolve this past weekend when he gave his life so that our city can continue to live in safety, and we owe his family an eternal debt of gratitude for that sacrifice. On behalf of the 27th Council District, I wish to extend my deepest condolences to Officer Mulkeen’s family, his fellow officers at the 47th Precinct, and every member of our City’s Finest.”

“There is no worse a moment in our profession than this,” said Police Commissioner Jim O’Neill, another cop’s cop who has seen it all. “Brian was always dedicated to keeping NYC safe. In fact, just last night he arrested a man in possession of a gun in the very same precinct where he would later be killed this morning. It’s heroic cops like him, across our nation, who refuse to allow violence & disorder to rule.”

Thank you, Officer Brian Mulkeen, for your service.