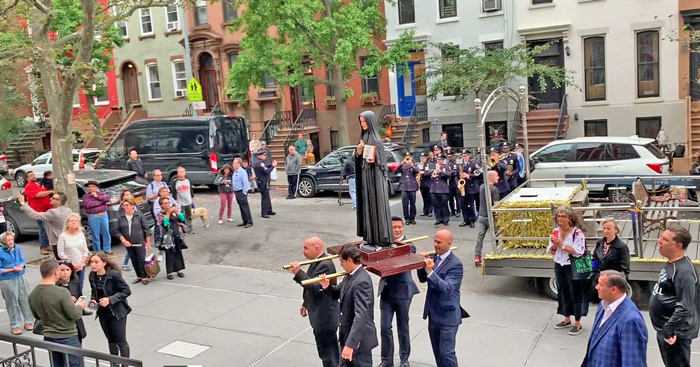 Photo Courtesy of the Diocese of Brooklyn

On Sunday, Bishop DiMarzio led a procession from Mother Cabrini Park on President Street in Carroll Gardens to Sacred Hearts – St. Stephen Church on Summit Street, where he hosted a special Mass in honor of the Cabrini, the Patron Saint of Immigrants.

The Diocese of Brooklyn is steadily drumming up support for the construction of a public statue recognizing the life and contributions of Mother Frances Xavier Cabrini.

DiMarzio and the diocese are the latest to publically take issue with the City’s “She Built NYC” campaign and its selection panel, led by City First Lady Chirlane McCray, for seemingly snubbing Cabrini.

“She Built NYC” is a new effort to commission a public monument or artwork on City property that honors women’s history in the five boroughs. Cabrini reportedly received 219 tallies—more than double the second-place vote recipient.

Despite earning this top ranking, a public Cabrini icon is not being planned.

St. Frances Xavier Cabrini, the Patron Saint of Immigrants, arrived in New York in 1889 and helped establish the Missionary Sisters of the Sacred Heart of Jesus, taking in orphans and foundlings, opened a day school to help pay expenses, started classes in needlework and sold their fine embroidery to earn a little more money. The institute started seven homes and a free school and nursery in its first five years.

Cabrini organized catechism and education classes for the Italian immigrants and provided for the needs of the many orphans in NYC. Cabrini also founded Columbus Hospital and Italian Hospital. In the 1980s, they were merged into Cabrini Medical Center.

“Mother Frances Cabrini was certainly one of the women who built New York City. Her work to establish orphanages, schools, and a hospital, along with her commitment to immigrants, absolutely should be recognized. The failure to honor Mother Cabrini with a public statue would be an affront to many New Yorkers, especially Italian-Americans, who see her as most deserving,” DiMarzio said.

Last month, the Italian Apostolate of the Diocese of Brooklyn established the Mother Cabrini Statue Fund. Proceeds from the fund will assist in creating a public Cabrini statue in Brooklyn.

In August, State Sen. Joe Addabbo, Jr. (D-Howard Beach) sent a letter to McCray demanding an explanation for the dismissal of Cabrini.

“I find it odd and questionable that ‘She Built NYC’ would ask the public to nominate women they would like to see honored and then not include, but actually ignore, the public’s overwhelming winner,” wrote Addabbo, who is president of the Conference of Italian-American Slate Legislators.

To contribute to the Mother Cabrini Statue Fund, visit catholicfoundationbq.org/cabrinistatue/.