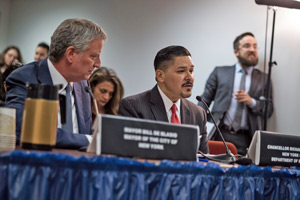 “I want to see great schools in every neighborhood,” Mayor de Blasio said as he and Schools Chancellor Carranza touted the Imagine Schools NYC Challenge.

The de Blasio administration is trumpeting a public-private partnership to create 20 new schools and transform 20 existing ones across the five boroughs into “schools of the future.”

Launching with an initial investment of $32 million in public and private funds, the Imagine Schools NYC Challenge will be a model for community-driven school innovation within the City’s Equity and Excellence for All education agenda, Mayor Bill de Blasio gushed Thursday.

“This is a big endorsement of public education in New York City,” Hizzoner added. “With this support, we’re going to help educators, students and communities come together to design new schools and re-design existing ones that will challenge our kids and increase academic rigor. I want to see great schools in every neighborhood.”

According to the administration, the transformational high school design project, XQ Institute, will support plans for both new and existing high schools; while Robin Hood, NYC’s largest poverty-fighting nonprofit, will support new schools across all grade levels.

According to de Blasio and City Schools Chancellor Richard Carranza, Imagine Schools NYC will produce at least 20 new (“Imagine”) or transformed (“Reimagine”) high schools, with at least one new high school in each of the five boroughs. The remaining 20 schools will be a mix of elementary and middle schools. All 40 Imagine NYC Schools will serve as models for the system. The administration pledged that the schools will be “innovative, academically rigorous, community-driven, inclusive, and intentional in their commitment to serve all students.”

Starting immediately, and continuing over the next three years, design teams have the opportunity to apply to become Imagine schools. Design teams, some of which have already begun forming across the City, will work together to submit initial concept proposals. Selected teams will advance to additional application rounds in winter and spring 2020, with the first round of Imagine and Reimagine school designs slated to be announced in May 2020.

The 20 new schools will not have selective admissions, the mayor noted, later adding that Imagine Schools NYC will focus on “the transformation of the student learning experience.” Examples of the kinds of actions school design teams could propose include: authentic, real world learning (internships, apprenticeships, college courses and visits, projects in the community); innovative themes; college, community and industry partnerships; changes to curriculum to align with interesting, high-skill, high-demand sectors; focus on arts, civic engagement, technology or a science, technology, engineering, and math subject.

“We have seen it time and again—whether expanding the largest computer science education program in the country, or providing a record number of students with internships and early work experiences—when the private sector partners with our public education system the big winners are students, families, and communities,” said Darren Bloch, director of the Mayor’s Office of Strategic Partnerships.

For more information on the initiative, visit schools.nyc.gov/about-us/initiatives/imagine-schools-nyc.