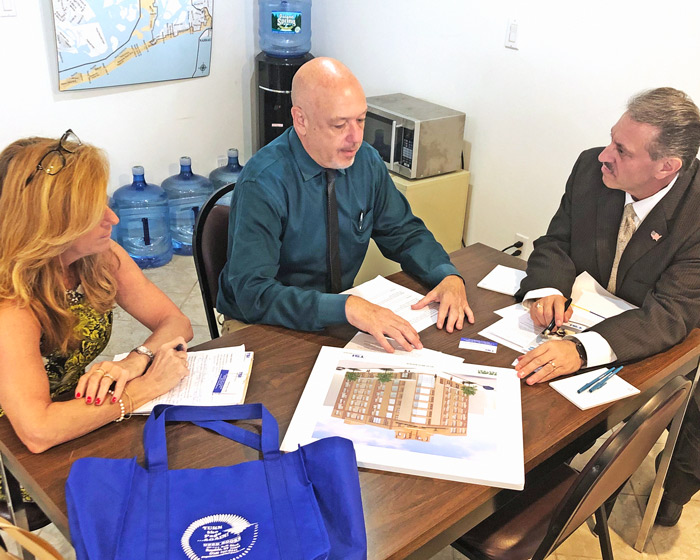 During the confab, Transitional Services for New York, Inc. CEO Larry Grubler, and TSINY Associate Director of Public Affairs & Fundraising Avé McCracken explained to Addabbo that Miele’s Respite program, formerly known as Parachute NYC, is a care service that is part of NYC Crisis Respite, which provides a “soft landing” for individuals experiencing an emotional or psychiatric crisis.

According to TSINY, Miele’s Respite uses Intentional Peer Support to provide a warm, calm, and safe alternative to hospitalization as they assist a mixture of clinicians and peers in working with the patient on their recovery.

TSINY officials added that in order to meet eligibility requirements, a person needs to be 18 years of age or older, have a safe and reliable place to return at the conclusion of their stay, be a resident of NYC, currently experiencing an emotional or psychiatric crisis, is not an imminent danger to themselves or others, medically stable, largely able to care for personal needs such as their hygiene and meals, voluntarily accept Respite services, and have no diagnosis of dementia or organic brain syndrome.

“To learn about such an amazing program that was named after an even more amazing person, was a great experience,” Addabbo said. “Joel Miele, Sr. was firmly entrenched in the Howard Beach community, as the Chairman of Community Board 10 as well as Department of Environmental Protection Commissioner. I believe that through the respite program, Joel’s name remains associated with helping others in their time of need.”

Miele, a U.S. Navy veteran, died in May 2013. His name also adorns the 163rd Avenue Pedestrian Bridge in Howard Beach. In March 2017, CB 10 voted unanimously to indicate its support to City Councilman Eric Ulrich (R-Ozone Park) to commemorate Miele, who was well known in south Queens for his dedication and service to others. In April of that year, the board submitted its formal request to Ulrich.

In its request letter, CB 10 identified the 163rd Avenue Pedestrian Bridge as a very “suitable and fitting location to note Miele’s long-standing and commendable service to his country, state, city, borough and the community in which he was almost a life-long resident.” Located between 99th Street and Hamilton Beach, the bridge is less than 200 feet away from Miele’s family home, where he and his wife raised their three children. The span is also just six blocks away from Miele’s childhood home.