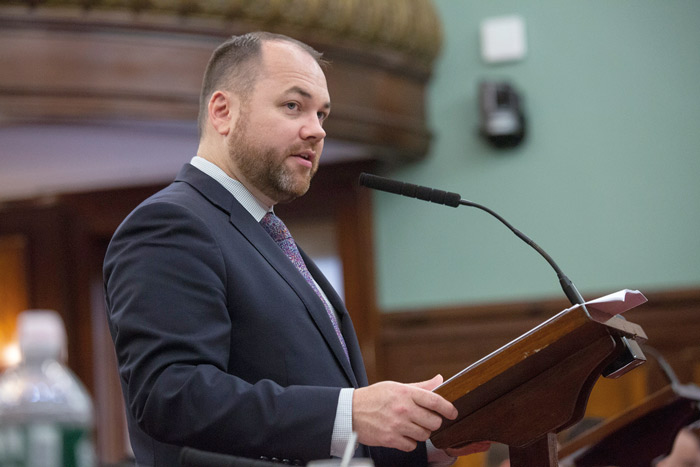 The massive, $1.7 billion measure will require the City Department of Transportation to issue and implement a transportation master plan every five years. According to the council, the plan’s goals would be to prioritize the safety of all street users, the use of mass transit, the reduction of vehicle emissions, and access for individuals with disabilities.

The first transportation master plan would be due December 2021 and would include:

250 miles of protected bike lanes over five years, with at least 30 miles in the first year and 50 miles in each subsequent year

Redesigning at least 2,000 signalized intersections over five years, with at least 400 redesigns each year

Accessible pedestrian signals at no fewer than 2,500 intersections, with at least 500 installations each year

Developing parking policies to promote the master plan’s goals of safety, mass transit use, reduced vehicle emissions, and access for individuals with disabilities; and

Within the first two years, create and maintain one million square-feet of pedestrian space

“The piecemeal way we plan our streets has made no sense for far too long, and New Yorkers have paid the price every day stuck on slow buses or as pedestrians or cyclists on dangerous streets. We need faster buses, safe streets infrastructure for pedestrians and cyclists, and more pedestrian space. We need to do everything we can to encourage sustainable modes of transportation, especially with the realities of climate change growing more dire every day,” Johnson said. “This plan will make New York City a much more livable and enjoyable place to call home.”

Mayor Bill de Blasio lauded the passage of the legislation, “which will continue the City’s progress on Vision Zero, helping to make New York City’s streets even safer in the years and decades to come. Since the start of my administration, the City has built four times as many miles of on-street protected bike lanes as under every other mayor combined, and together with the council we will continue to build infrastructure that will carry on the work that has brought down fatalities for the last five years.”