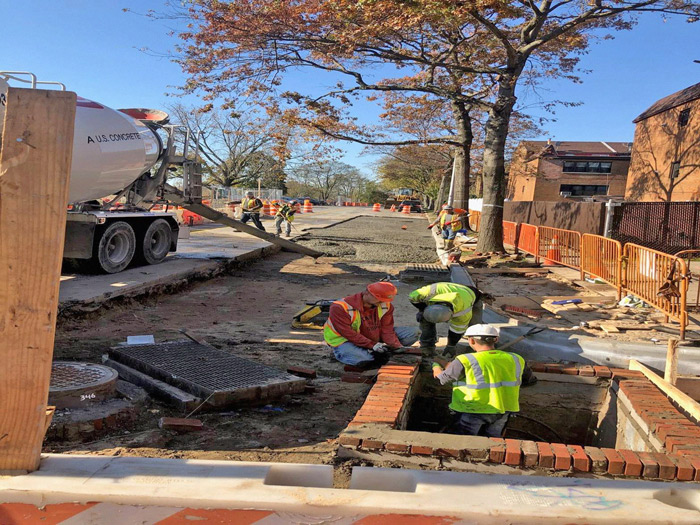 Significant, long-awaited sewer infrastructure upgrades on a Lindenwood street should be wrapped up by the end of the month, City Councilman Eric Ulrich (R-Ozone Park) recently noted.

“The capital project I announced several weeks ago at the intersection of 79th Street / Shore Parkway should be completed by Thanksgiving week,” Ulrich posted on Twitter last Wednesday night. “This will bring much needed relief to the area.”

In September, Ulrich and City Department of Environmental Protection officials announced the upgrades after examining a familiar eyesore at the northeast corner of the intersection of 157th Avenue and 79th Street, where the slowly sinking roadbed has been perilous for pedestrians and motorists alike for years.

The councilman secured $1.5 million in capital funding for the agency for an exhaustive project that will make significant drainage improvements and level the “sinking” blocks.

Both DEP and the Department of Transportation have mended the area several times since 2014, but the road eventually continued to descend. Area residents have fretted about the swath of street depreciating into a massive sinkhole.

“Patches have been done by DOT [and] DEP to fix the street and sidewalk, but a full restoration really needed to be done and thanks to the Council Member, [there is] now funding [for] it in FY 2020 capital plan to get that placed,” DEP Commissioner Vincent Sapienza, P.E. said.

“This is one of the most notorious flooding locations in the district. This area has been sunken in for a very long time. DEP and DOT have done their best to patch over the area to mitigate some of flooding, but the blocks continued to sink,” he added.

Community leaders said they’ll be pleased with the “comprehensive fix.”