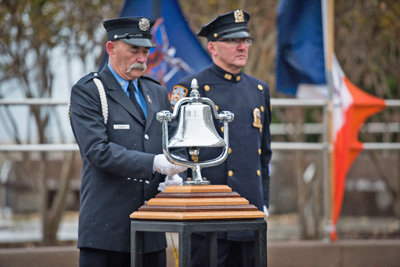 Members of the ceremonial units of the Fire and Police departments ring the bell as the names of the 265 victims of the Flight 587 tragedy are read aloud.

Families of the 265 victims were joined Tuesday in Rockaway Park by first responders, area residents, and elected officials as the City observed the 18th anniversary of the American Airlines Flight 587 tragedy.

On Nov. 12, 2001, with Gotham still gripped with grief following the Sept. 11 terrorist attacks on the World Trade Center, AA Flight 587 crashed into Belle Harbor minutes after taking off from John F. Kennedy International Airport. All 260 people aboard the Airbus A300 aircraft bound for the Dominican Republic and five residents on the ground perished.

“On this solemn day, the entire Queens community remembers all those who lost their lives as well as the family and friends that they left behind,” State Sen. Joe Addabbo, Jr. (D-Howard Beach) said.

“It’s 18 years later, but I know from speaking with so many of you that this day is one of a pain that is sharp and vivid just as much as it was 18 years ago,” Mayor Bill de Blasio added. “And grief has not lessened with time, but I also have heard from so many of you the memories, the joyful memories, of those you loved. What they meant to you what they still mean to you. What their lives meant for your family and the impact they have even today on children, on family, on friends who remember them, who live by their example, who are inspired by them.”