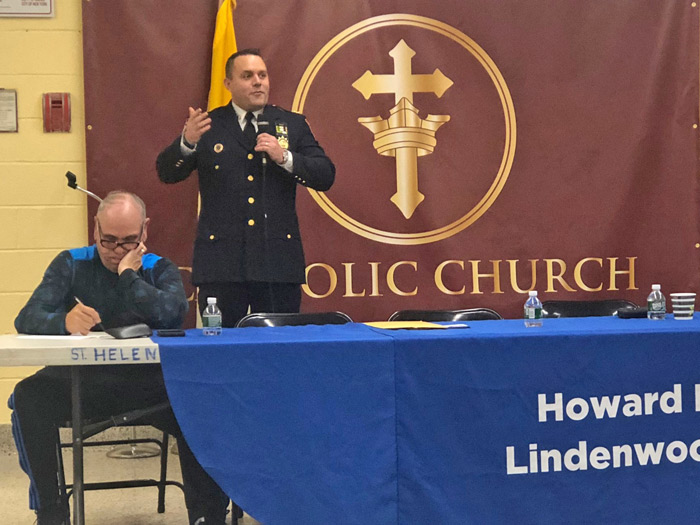 “I have some tremendous shoes to fill,” Costello quipped after accepting the microphone from his immediate predecessor, Deputy Insp. Brian Bohannon, Jr., the newly minted commander of the 113th Precinct who expressed gratitude for the loyalty that Howard Beach and Lindenwood residents have displayed over the past three years.

Costello, 43, took the reins from Bohannon earlier this month. He noted Tuesday that his father, a retired cop, was raised in Howard Beach.

“My roots are from here,” the captain said, later adding that he’s “a third-generation cop” with two brothers and three cousins still on the job. “I’m humble and glad to be part of the community.”

Costello has hit the ground running. On Tuesday, he warned residents about crimes that usually see spikes during the holiday season.

“I’ve noticed in Howard Beach—be cognizant of your packages. Criminals are opportunists,” Costello cautioned. He also pointed out that there are 32 blue U.S. Postal Service collection boxes in Sector A (Howard Beach and Lindenwood); not all have been retrofitted with “fishing-proof” equipment.

“If you can, during the holidays, please physically go into the post office,” the captain said.

Costello on Tuesday also got the stamp of approval from a familiar face: Inspector Jeff Schiff, who led the 106 from September 2013 to March 2016. He’s currently assigned to the Counterterrorism Division.