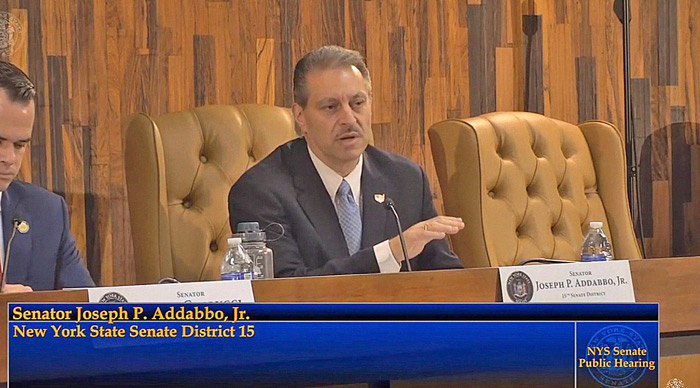 “When our veterans return home they face a very unique set of challenges and it is our responsibility as elected officials to ensure that their transition from military life back to civilian life is as smooth as can be,” Sen. Addabbo said.

State Sen. Joe Addabbo, Jr. (D-Howard Beach) on Friday noted that he’s looking forward to the 2020 legislative session in Albany and that working on helping veterans deal with mental health and other issues after returning from service, in an effort to reduce the military’s suicide rate, will be a top priority.

“When our veterans return home they face a very unique set of challenges and it is our responsibility as elected officials to ensure that their transition from military life back to civilian life is as smooth as can be,” the senator said.

According to a U.S. Veterans Administration study that was presented at the hearing, 22 veterans commit suicide every day, and according to the National Center for PTSD, more than 1 in 10 veterans suffer from post-traumatic stress disorder. Many veterans also find it difficult to find work and housing after their service, leading to an increase in homelessness among veterans, which can negatively affect a veteran’s mental health, according to the VA.

During the testimony, Marianne Goodman, M.D., a psychiatrist and professor of psychiatry at the Icahn School of Medicine at Mount Sinai in New York City, noted that many veterans do not seek VA care. They instead go to their primary care doctors, who may not even know their patient is a veteran. Without proper outreach to the veterans, many do not know of the services to which they are entitled.

Goodman also said that through funding in the budget, the State Psychiatric Association, Medical Society of the State of New York, and the New York Chapter of the National Association of Social Workers have been able to grow the Veterans Mental Health Training Initiative. The VHTI trains and educates the interdisciplinary team of primary care specialists and community mental health providers on veteran-specific mental health issues.

“The continued funding of these important programs is critical if our state is to continue its efforts to better assist our veterans when they return home,” said Addabbo, a member of the Senate Veterans, Homeland Security and Military Affairs Committee. “However, we can fund the best programs in the country, but if veterans do not know about them, they are useless. We need to do a better job of outreach to veterans to make them aware of the services they can access.”

One such critical program that Addabbo said vets should be more aware of is the Joseph P. Dwyer Peer-to-Peer Veterans Mental Health Program, which allows veterans a chance to talk to other veterans about what they are experiencing since returning home.

According to Addabbo, due to an increase in State funding for the Dwyer Peer-to-Peer program, it will be expanded for the first time to a location within the five boroughs.