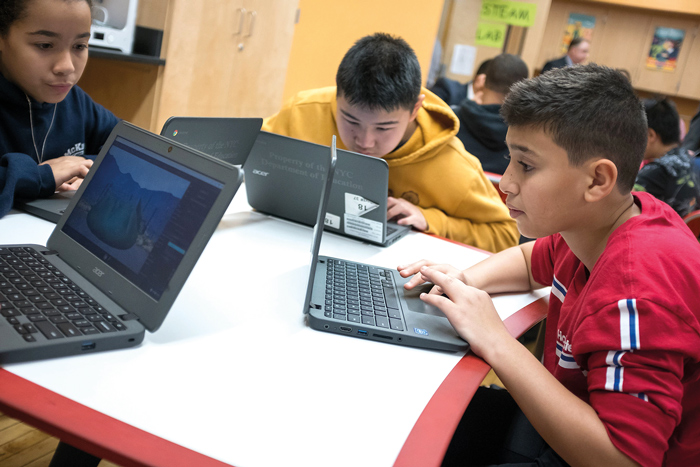 Mayor Bill de Blasio this week effusively extolled the potential impact (zaftig figures and all) that universal broadband could have on the Big Apple and its residents—and promptly provided a roadmap to that tech treasure.

The administration’s plan is anchored in five principles: equity, performance, affordability, privacy and choice, de Blasio noted. Additionally, the City has pledged to work with service providers that meet the NYC’s principles and expand its role across all broadband components by coordinating among permitting entities, optimizing real estate like rooftops and lightpoles, and building fiber optic lines to connect assets. The City will initiate the plan by issuing a Universal Solicitation for Broadband to steer the relationship between the City and the private sector toward universal service with a focus on covering areas of the City that currently lack connectivity.

The IMP’s planned infrastructure is estimated to cost $2.1 billion.

As it rolled out the Internet Master Plan, the administration noted that current broadband subscription costs can be a burden on the budgets of low-income families. For example, 46 percent of city households living in poverty do not have broadband in the home. The Bronx has the highest percentage of residents without home broadband at almost 38 percent.

The digital divide in New York is considered a barrier to economic opportunity for residents and small businesses and a threat to long-term economic growth in Gotham, according to the administration. While many New Yorkers use a mobile connection and a home connection, New Yorkers increasingly need both connections to make full use of the internet. However, as the IMP points out, 40 percent of households do not have this level of connectivity today; 18 percent of residents—more than 1.5 million New Yorkers—have neither a mobile connection nor a home broadband connection.

This significant portion of the City faces barriers to education, employment, banking, healthcare, social networks, and government services that other residents do not.

“Over time, without broadband as a foundational resource, neighborhood economies risk losing ground in the face of regional, national, and international competition,” officials posited in the IMP.

According to de Blasio, universal broadband “will transform the city with widespread economic benefits.” Based on the administration’s analysis of the economic impact of universal broadband, getting all New Yorkers connected and establishing equitable infrastructure citywide may result in up to 165,000 new jobs, a $49 billion increase in personal income, and $142 billion in incremental Gross City Product in 2045. While all New Yorkers will benefit from universal broadband, these impacts will be most dramatic for the people who are currently excluded from full participation in the digital economy.

“Now is the time for the private sector to get serious about working with the City to bring connectivity to all New Yorkers,” Farmer added. “No other city in the nation has introduced such a clear, strategic, and partner-focused roadmap to universal broadband.”