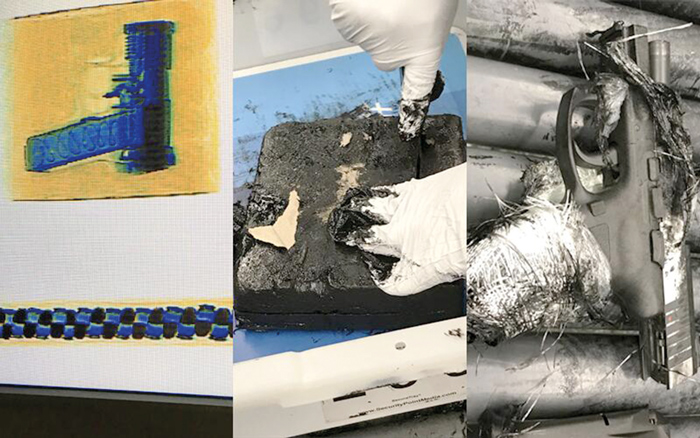 A person flying out of JFK Airport last summer concealed this .45-caliber firearm in a block of tar.

The number of guns confiscated by federal officers at John F. Kennedy International Airport in 2019 quadrupled compared to the prior year’s figures—and LaGuardia Airport just missed joining JFK in the ignominious found-firearm feat, according to a report recently released by the Transportation Security Administration.

TSA officers detected eight firearms at JFK checkpoints last year, an alarming escalation from 2018, when a total of two were found at the borough travel hub. In a nearly identical upsurge, federal security staff spotted seven guns among passenger possessions at LGA in 2019, compared to the two firearms uncovered in ’18 by agents assigned to the East Elmhurst airport.

Authorities also noted that TSA officers deterred 27 guns last year at the four NYC region airports (JFK, LGA, Newark Liberty International, Long Island MacArthur)—a notable increase from the 20 seized in 2018, and mirrored the national trend of an uptick in the number of firearms travelers have been bringing to airports over the course of the past several years.

In 2019, TSA officers discovered 4,432 firearms at 278 airport checkpoints nationwide; up from the 4,239 guns found in 2018. The top five airports at which TSA officers detected guns over the past 12 months were: Hartsfield-Jackson Atlanta International (323); Dallas/Fort Worth International (217); Denver International (140); George Bush Houston Intercontinental (138); and Phoenix Sky Harbor International Airport with 132.

Travelers who bring weapons to an airport checkpoint are subject to federal civil penalties of up to $13,000, TSA officials warned.