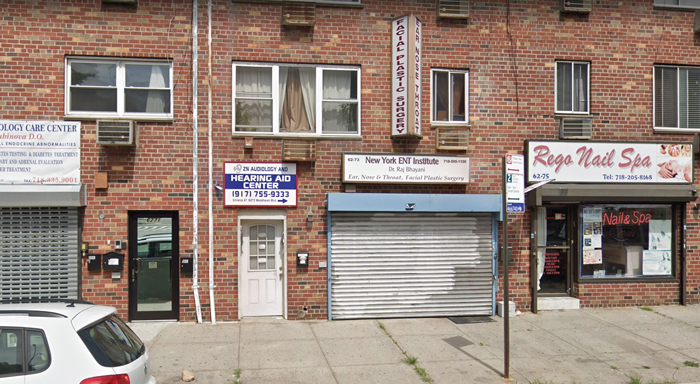 A Rego Park doctor has agreed to pay the United States $1.1M to resolve civil allegations that he and his practice paid kickbacks and submitted false claims to federal healthcare programs for services provided to residents in adult homes in violation of the False Claims Act, federal prosecutors announced Tuesday.

The claims against Dr. Rajendra Bhayani, an otolaryngologist (medical doctor who specializes in the ear, nose, and throat), that were resolved by the settlement are allegations only, and there has been no determination of liability, Brooklyn U.S. Attorney Richard Donoghue noted.

According to authorities, adult homes are privately owned residential facilities licensed by the State to provide long-term care and supervision to adults with disabilities or mental illnesses. An investigation by the FBI revealed that from 2012 through 2016, Bhayani allegedly paid cash tips, excessive rent and other improper remuneration to medical management companies in adult homes in the Eastern District of New York to obtain exclusive access to bill for allergy testing and other medical services to residents in violation of the Anti-Kickback Statute. Bhayani then obtained payment for these services from Medicare and the Federal Employees’ Health Benefits Program, although the services were actually performed by his nurse practitioner, and some of the services performed were medically unnecessary.

The U.S. Department of Health and Human Services, Office of Inspector General has concurrently entered into an Integrity Agreement with Bhayani and New York Otolaryngology & Aesthetic Surgery, P.C. Among other things, the Integrity Agreement requires compliance training that specifically addresses the Anti-Kickback Statute and a quarterly claims review to be conducted by an Independent Review Organization, Donoghue noted.