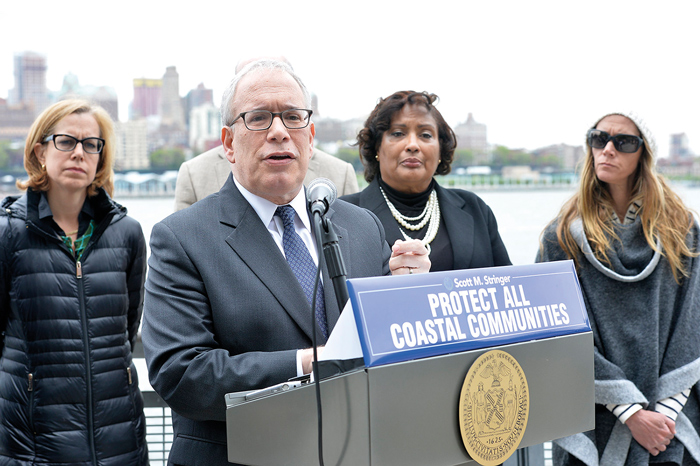 In the letter, Stringer castigated the corps’ proposal for not adequately protecting coastal communities from the threat of sea level rise and associated flooding. The Comptroller’s letter also highlighted the long construction timeline associated with the storm barriers and their high cost estimate — noting that the largest of the options outlined in the proposal would take a quarter of a century to build out, cost six times that of shorefront resiliency options, and endanger the delicate ecosystem of the harbor including the region’s network of marshes and wetlands that are critical to mitigating storm surge.

Stringer said he is calling on the agency to implement an integrated and environmentally-conscious approach that’s focused on onshore resiliency measures including localized floodwalls, dune and wetland restoration, living shorelines, reefs, and levees. Stringer’s missive noted that this approach was the only way to protect the city from rising sea levels, storm surge from non-catastrophic weather events, and increasingly catastrophic storms in the future.
The letter follows a May 2019 report published by the comptroller, “The Costs of Climate Change: New York City’s Economic Exposure to Rising Seas,” which exposed substantial underspending of federally-appropriated Superstorm Sandy recovery funding that the City had not yet allocated to protect vulnerable coastline communities including only 57 percent of a combined $14.5 billion in federal funds. The report concluded that lagging spending posed a threat to the 520 miles of coastline citywide, which is estimated at a combined property value of $101.5 billion within the city’s current 100-year floodplain map — marking a more than 50 percent increase in value since 2010.

“There’s no question about it — a future Superstorm Sandy will come and New York Harbor will bear the brunt of it. Too many of our waterfront communities are all too vulnerable to the next storm, or even the next high tide,” Stringer said Friday. “I am urging the Army Corps of Engineers to get shovels in the ground on shorefront resiliency options like floodwalls, dune systems, wetlands, and levees that can protect New Yorkers and their livelihoods. Lives are at stake, homes and businesses are on the line, and futures hang in the balance. We need to act with urgency, plan strategically, and build out resiliency efficiently in the era of climate change, because time is not on our side.” 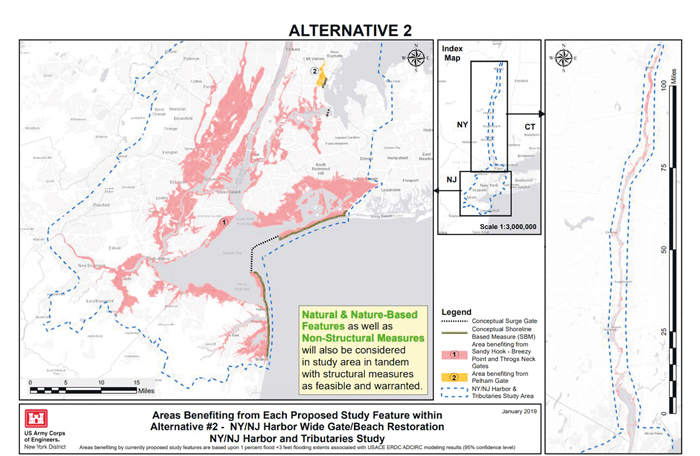 Riverkeeper President Paul Gallay added, “As Comptroller Stringer wisely observes, we need to take thoughtful, comprehensive steps to protect our communities from coastal flooding, and in-water barriers simply won’t do the job. Massive in-water storm surge barriers would do nothing to protect us from sea level rise. They would take decades to build, cost exorbitant sums of money, do real damage to our river ecosystems, and put communities outside of the barriers at much greater risk. Also, we’re seeing them fail in communities like New Orleans. Riverkeeper thanks Comptroller Stringer for challenging the Army Corps to do what’s right for our communities, rather than pinning its hopes on an unworkable and ill-advised non-solution like in-water barriers.”

“It is critical that we have clear paths forward for adapting to sea level rise and climate change, and we appreciate the US Army Corps of Engineers’ work to study our options,” said Roland Lewis, President and CEO, Waterfront Alliance. “We are, however, concerned about the approach, particularly that the authorized study is solely framed around addressing storm surge, when thousands of homes and businesses lie in areas that will likely be permanently inundated from sea level rise by the end of the century. Further, we are concerned about a process which millions are unaware of, and which may be decided without their true engagement. There is no silver bullet to the challenge and we support efforts to get federal dollars to our region. But in doing so, we ask of the Corps and our congressional colleagues to address sea level rise from the outset; significantly increase investment in public engagement; and ensure local leadership in project design and community engagement. We do need solutions and soon, but we need to do it right.”

And Kimberly Ong, senior attorney at the Natural Resources Defense Council echoed, “The Army Corps’ strategy to build a massive wall in the New York Harbor poses serious risks and could do more harm than good. These plans could cause irreparable damage to the ecosystem and coastal communities of the region, threatening marine life and stirring up pollution along our waterfront. What’s worse, this proposal does nothing to address the threat of climate change New Yorkers know all too well. Before racing to erect giant storm-surge barriers, the Corps needs to consider coastal projects that would be less costly, more protective, and less destructive to the environment and local communities.”